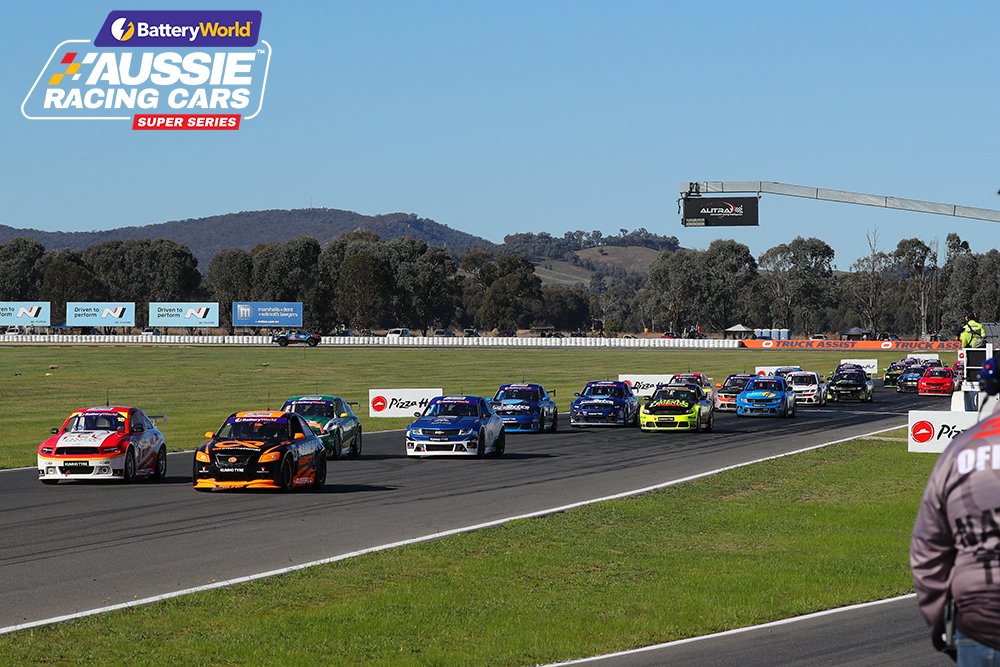 Round 5 of the Battery World Aussie Racing Cars went down to the wire, cold frosty mornings but lovely fine days greeted our drivers and teams. Below you'll find the four race recap wraps, plus photos from each of the races.

Second across the line in the fourth and final race of the Battery World Aussie Racing Cars Series gave Tom Hayman the win. But overall it was Cody Brewczynski who took the overall victory at the Pizza Hut Winton SuperSprint meeting.

Hayman (Di Prinzio Concreting Mustang) chased Joel Heinrich (Osborn Transport) who led the nine-lap race throughout, to the chequered flag. Heinrich unfortunately received a five-second penalty that relegated him to seventh in the race result.

Right with them at the end was Brewczynski (Shell Rimula Mustang) with third, and just six tenths of a second behind Heinrich. Brewczynski was second initially but lost out to Hayman on the second lap.

Behind them there was another close battle where Lachlan Ward (Productivity Bootcamp Camaro) held off Josh Anderson (CoolDrive Mustang) as Courtney Prince (Local Legends Mustang) closed in the concluding laps.

Rylan Gray (Camaro) was next ahead of Ryan Reynolds and Reece Chapman in a pair of Mustangs. Then followed Anthony DiMauro (Camaro), Ryder Quinn (Euro GT), Nick Lichtenberg (Altima) and a long gap to Troy Jones (Camaro) and the rest.

Leigh Bowler (Camaro) and Cody Mckay (Commodore) tangled at turn eleven on lap one with both losing track position. Matt Forbes-Wilson (Camaro) missed the Saturday races and started at the rear. He made it up to 12th before dramas forced him out.

Race three of the Battery World Aussie Racing Cars Series at Winton Raceway was a thriller, despite the lead changes only in the last three of the nine-lap affair. Cody Brewczynski (Shell Rimula Mustang) was the beneficiary of the scraps and had his first win since the first round.

With the top ten inversion from the result of race one, Ryder Quinn (Euro GT) and Reece Chapman (Mustang) shared the front row. They ran side-by-side through turns one and two before Chapman took the lead.

Ryan Reynolds was third at the end of lap one before front clip damage forced him to make a pitstop. Chapman had his own way at the front as the battle for second hotted up. On lap three out of turn eleven, Quinn had a bump with Lachlan Ward (Camaro) and came off second best and dropped to seventh as a result.

Over the ensuing laps Ward was joined by Tom Hayman (Mustang), Joel Heinrich (Cruze), Brewczynski and Rylan Gray (Camaro) as they bridged the small advantage to Chapman.

In the hectic battle that followed, Chapman ran wide out of turn eleven on lap seven and was subsequently nabbed by Hayman and Heinrich. They were three-wide to turn one and there was contact between Chapman and Hayman who spun.

On the next lap Brewczynski slipped under Heinrich to lead to the flag while the latter was edged out of second by 0.023s by Ward as they crossed the finish line. Quinn recovered to fourth ahead of Gray, Courtney Prince (Mustang), Josh Anderson (Mustang) and Chapman.

Series points leader Tom Hayman confirmed his position at the top of the pops with an all-the-way win in second race of round five of the Battery World Aussie Racing Cars Series at Winton Raceway.

The Di Prinzio Concreting Mustang driver started from position two and grabbed the lead immediately for an all-the-way victory over race one winner Joel Heinrich (Osborn Transport Cruze). Cody Brewczynski (Shell Rimula Mustang) appeared to put the engine troubles of the previous two rounds behind him to score third place.

Brewczynski’s teammate Ryan Reynolds finished a lonely seventh, clear of a big scrap for the final spots in the top ten – important as the tenth finisher would have pole position for race three.

After a small offroad excursion on the first lap meant Reece Chapman (Mustang) had Rylan Gray (Camaro) hounding him for much of the race, and ultimately got by. Anthony DiMauro (Camaro) looked likely to secure tenth until pipped by Ryder Quinn (Euro GT) right at the end. Quinn missed the first race and started this one at the rear of the field.

His uncle Kent Quinn (Aurion) was an early pit visitor after going off at turn one on the opening lap where he spun and tagged Matt Gooding (Camaro). It damaged the front clip which had to be removed.

Race One of the fifth Battery World Aussie Racing Cars round has gone down to the wire with the pole-setter and second fastest from qualifying swapping spots a couple of times during the race, Joel Heinrich got the jump from Tom Hayman when the lights went out but Hayman took the lead mid-way through the first lap and stayed there for the first two thirds of the race, pulling out a lead over Heinrich, the later slowly drew Hayman back in and with three to go, made his way past at turn 10, and held him off to the chequered flag.

The pair gapped the field by 5 seconds and both set new lap records for Aussie Cars at Winton, third home was Cody Brewczynski.

Behind the leaders the field seperated into a couple of hard fighting packs, Lachlan Ward lead home Courtney Prince and Joshua Anderson who rounded out the top six.

Denis Butler failed to finish after going off track at turn one late in the race. 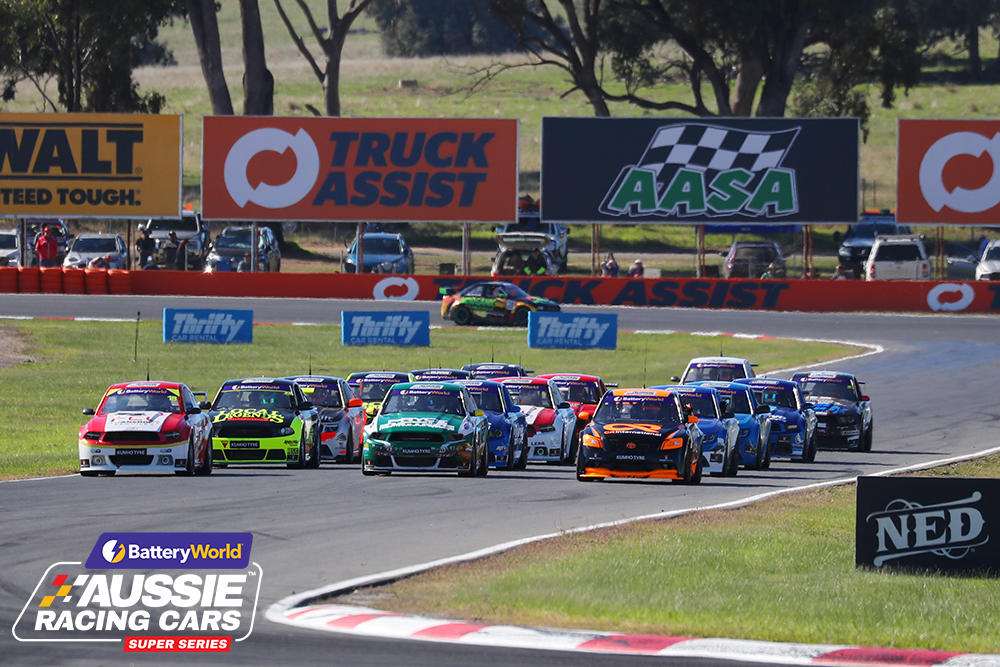 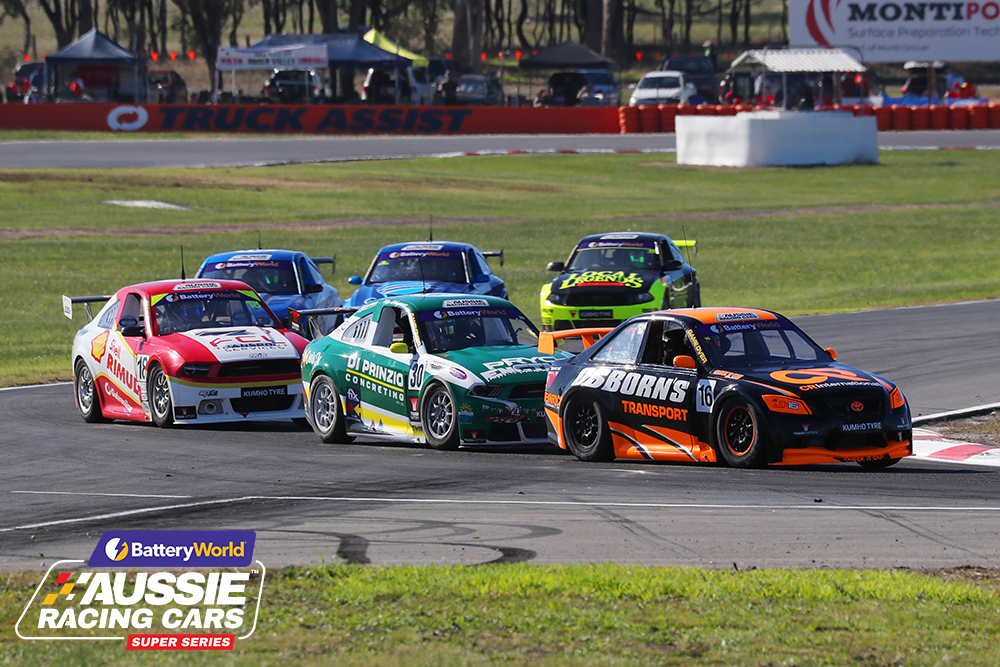 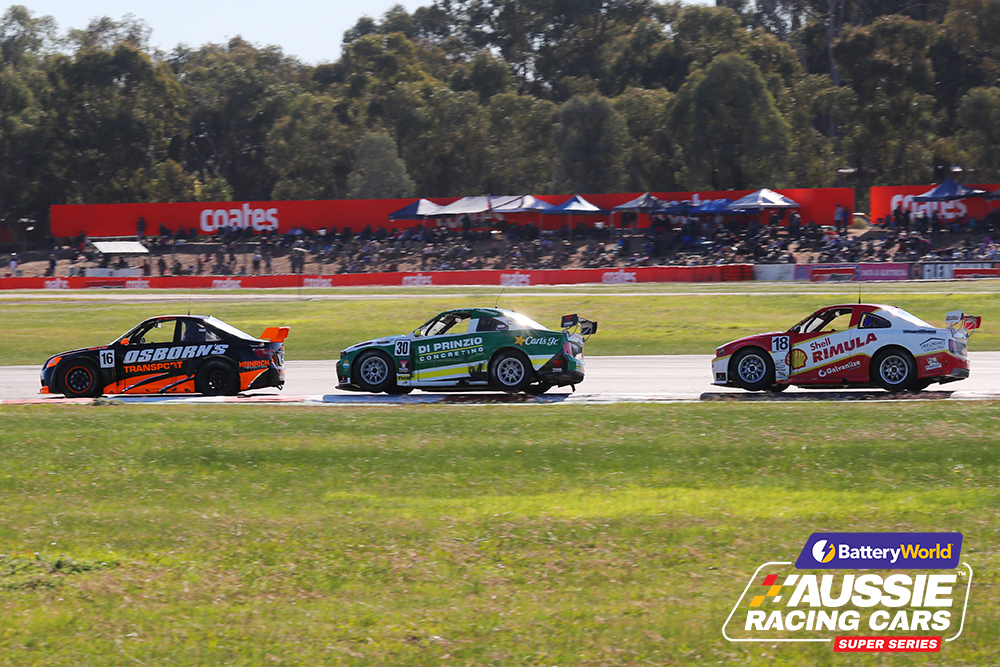 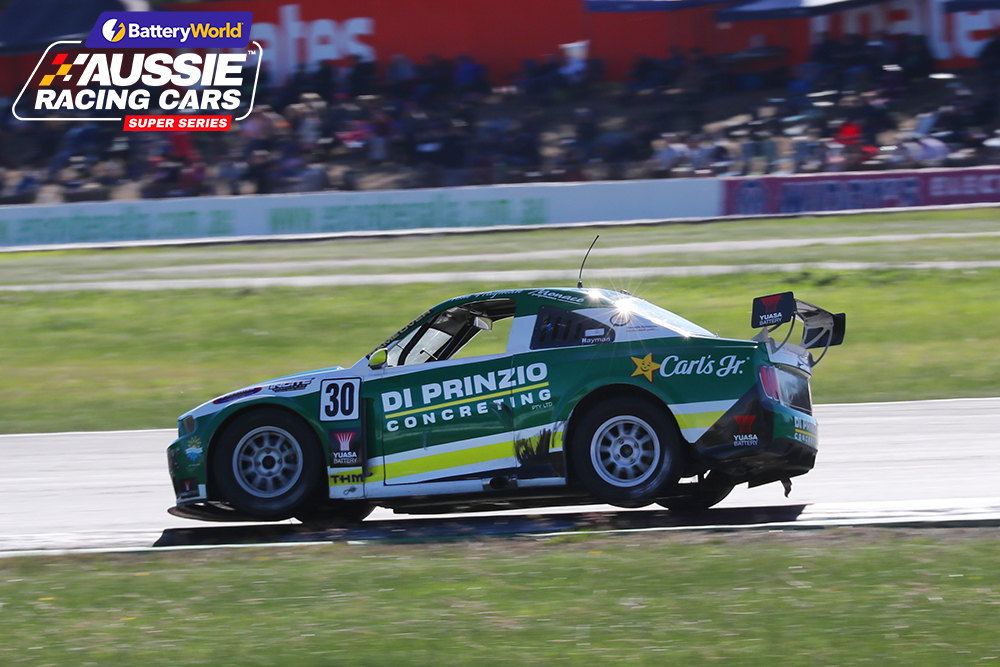 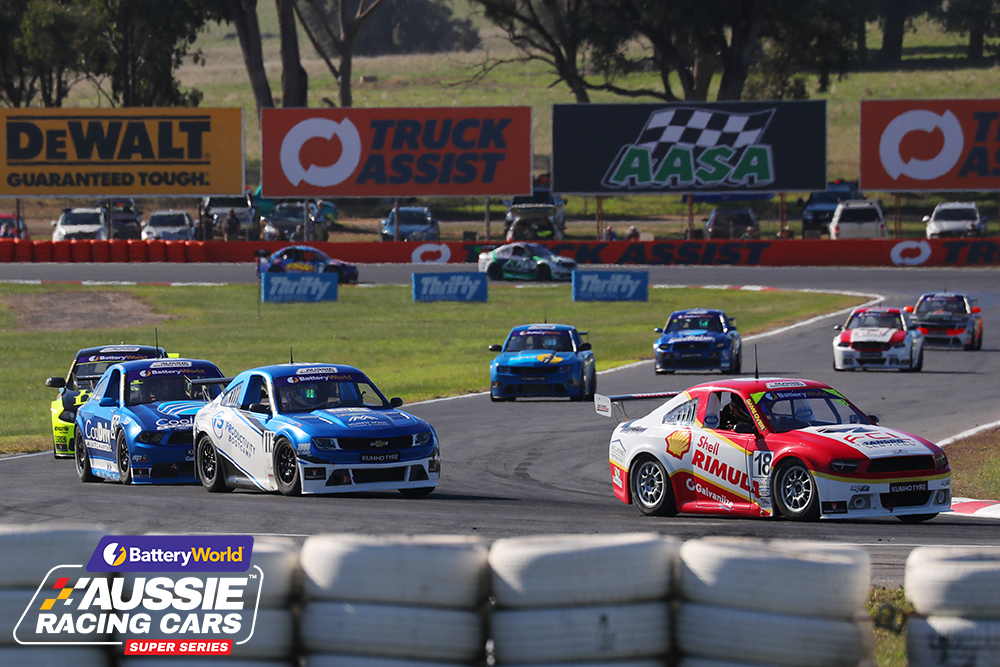 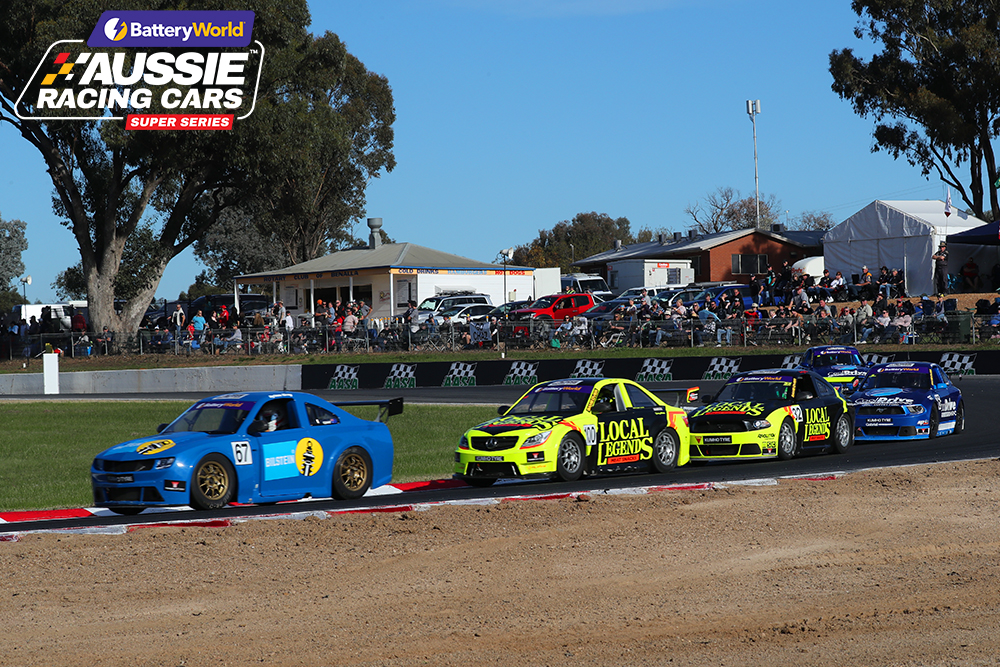 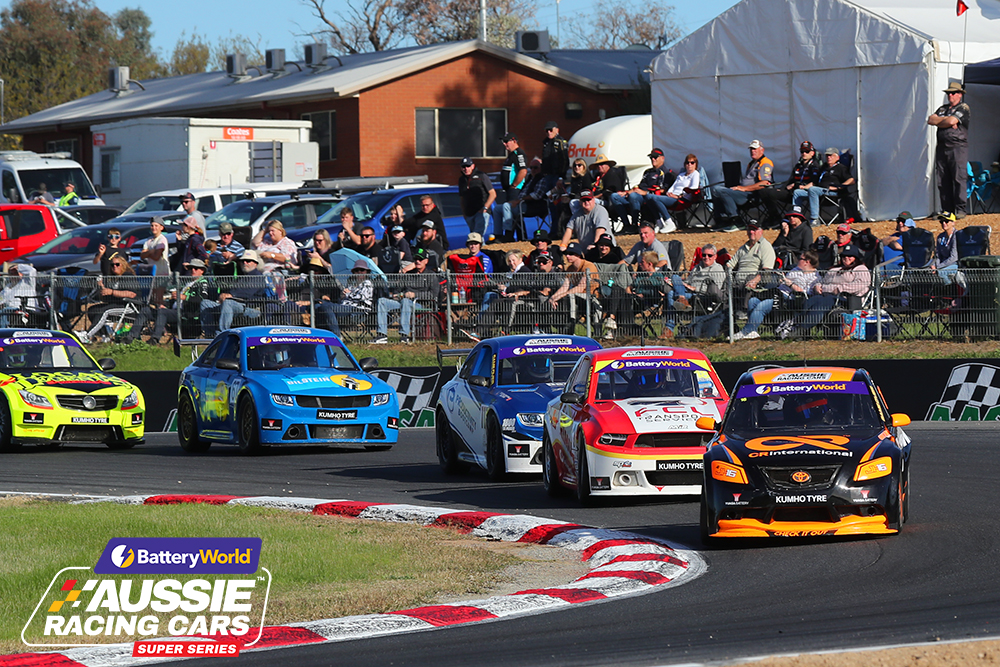 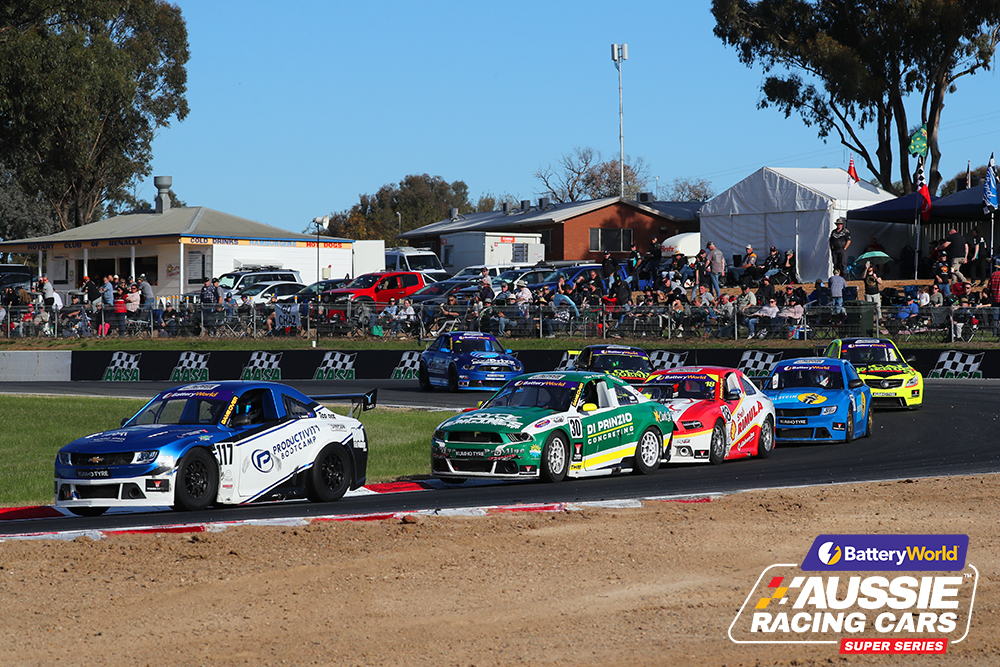 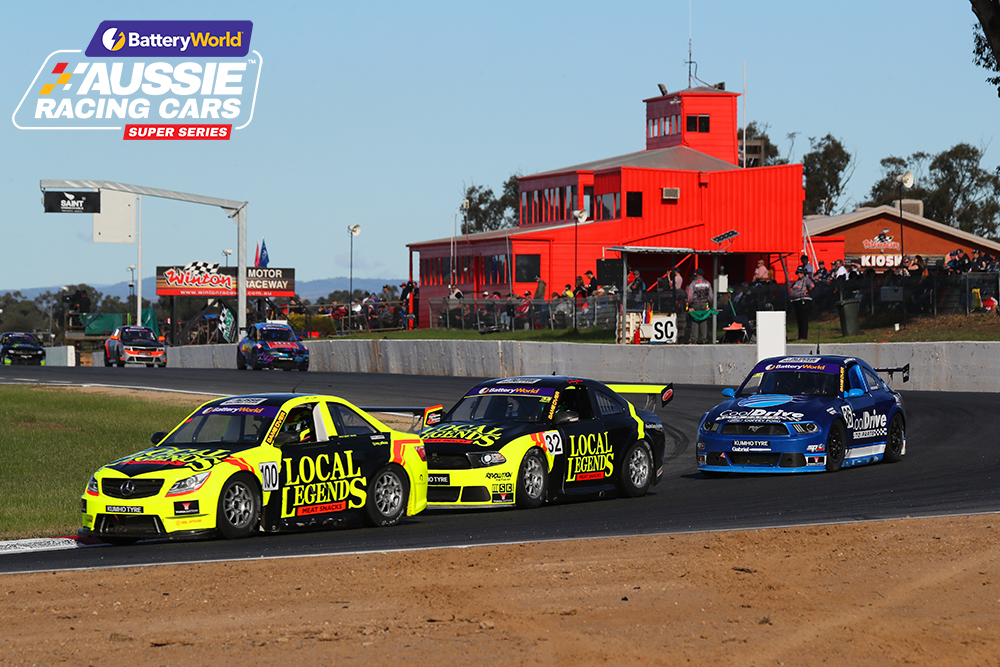 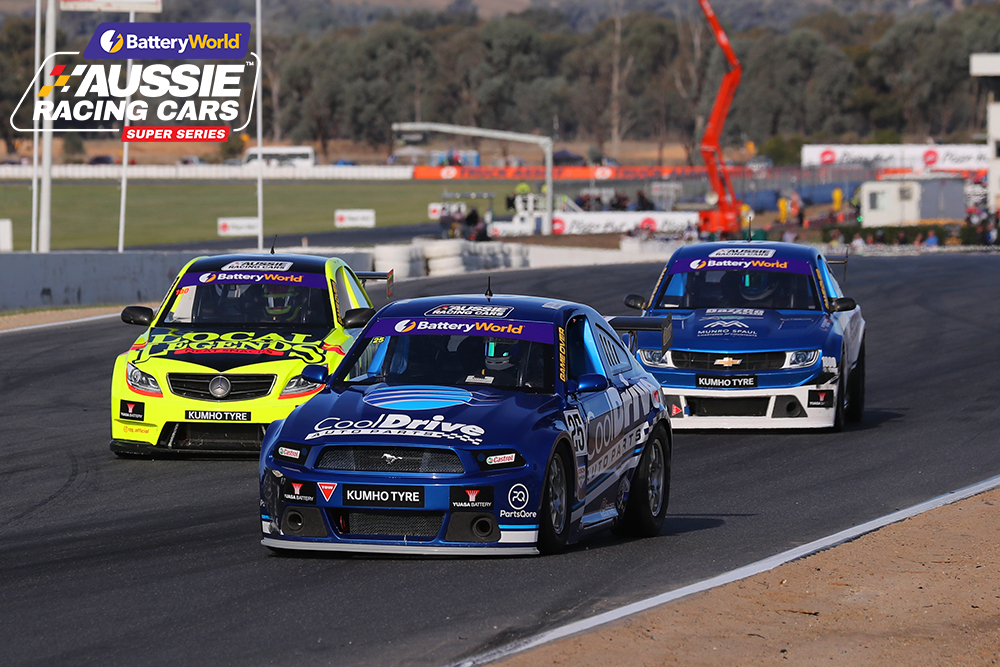 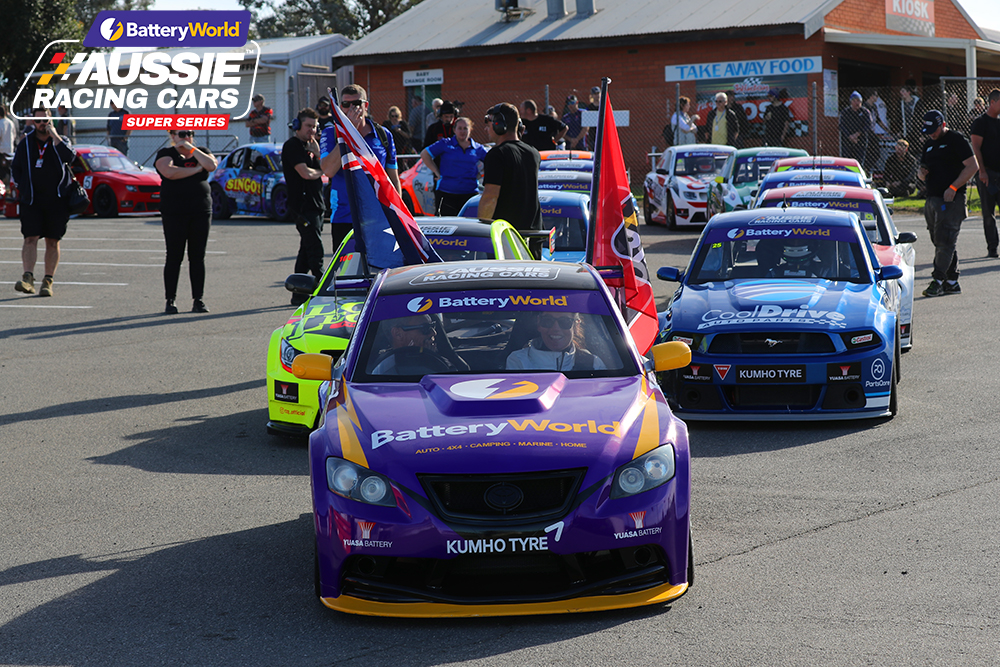 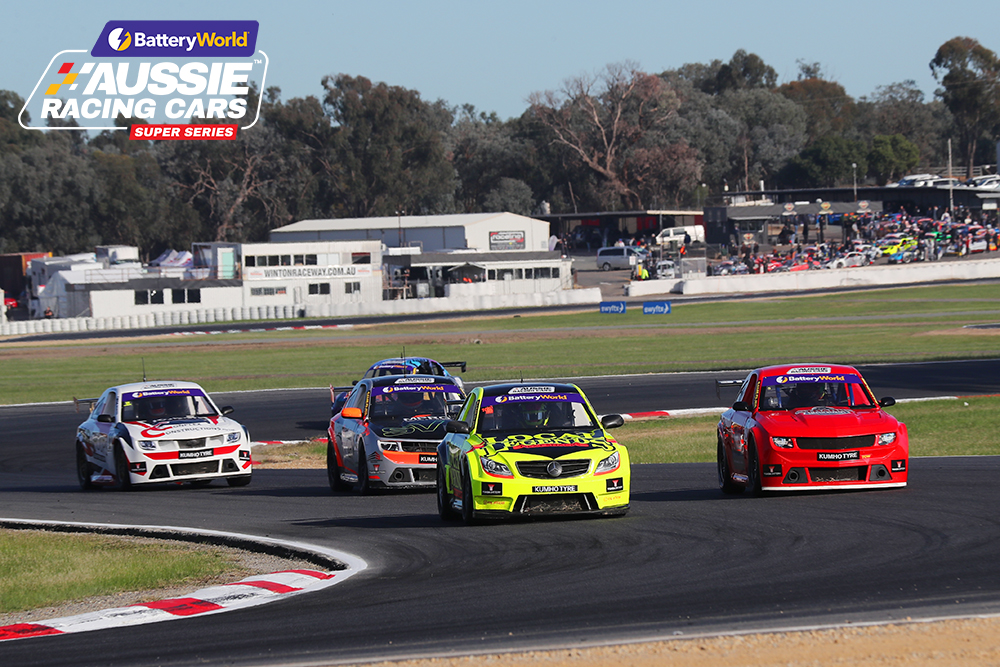 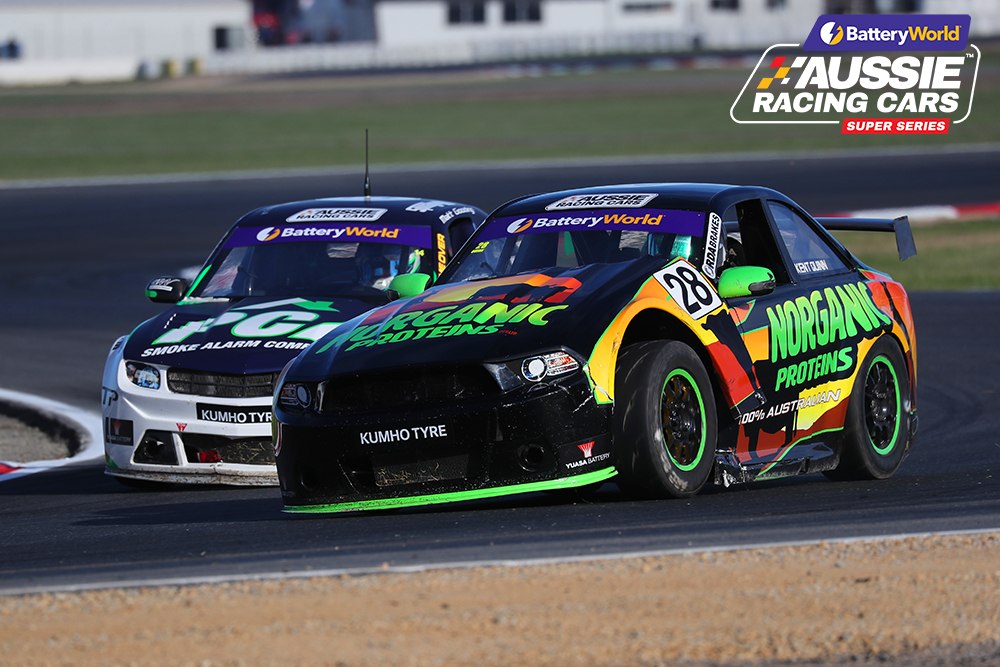 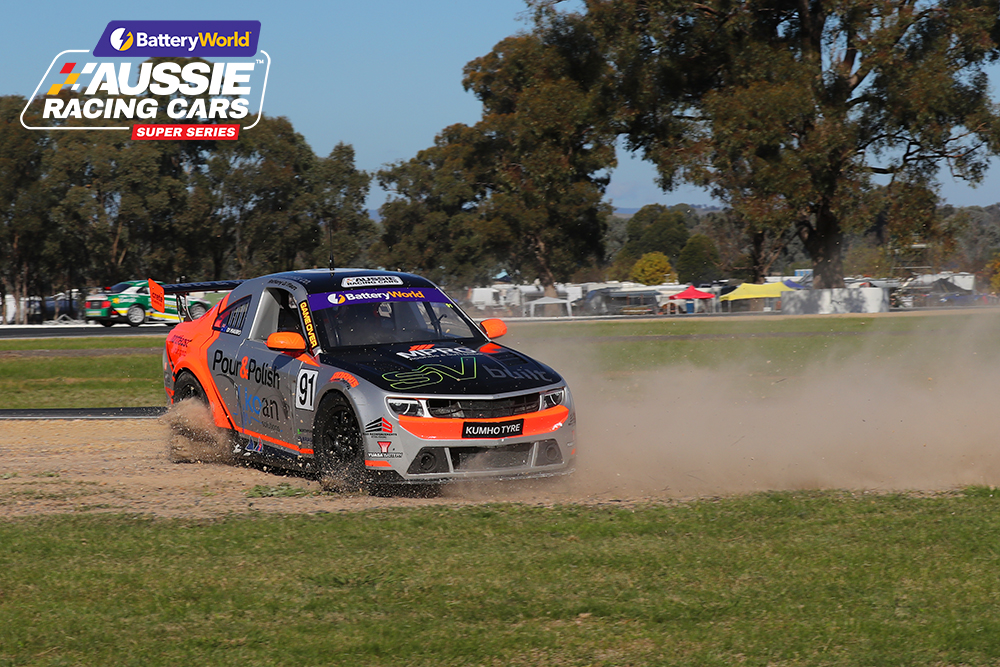 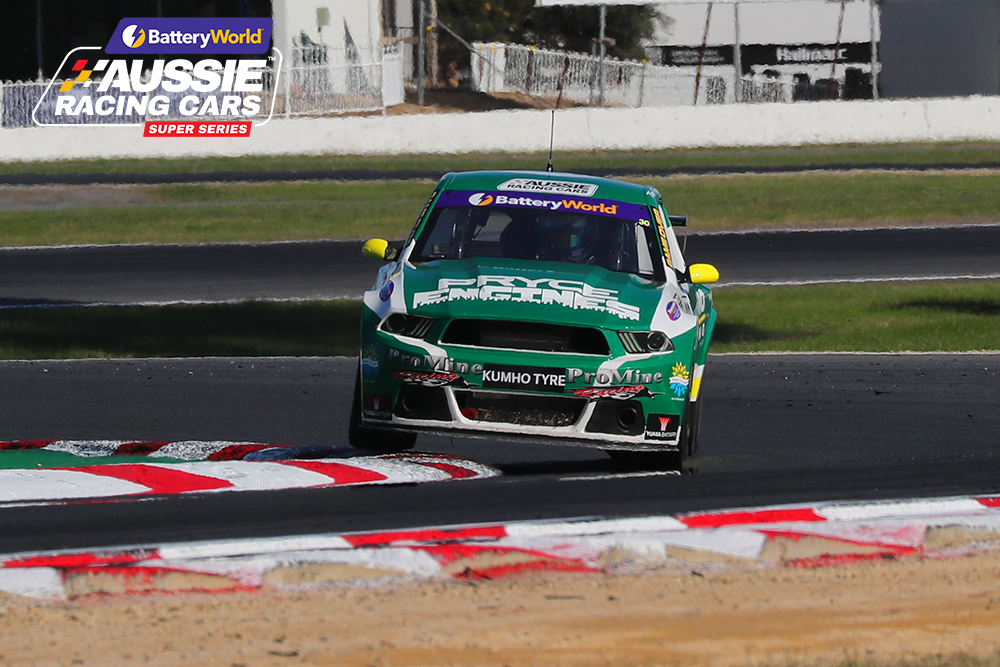 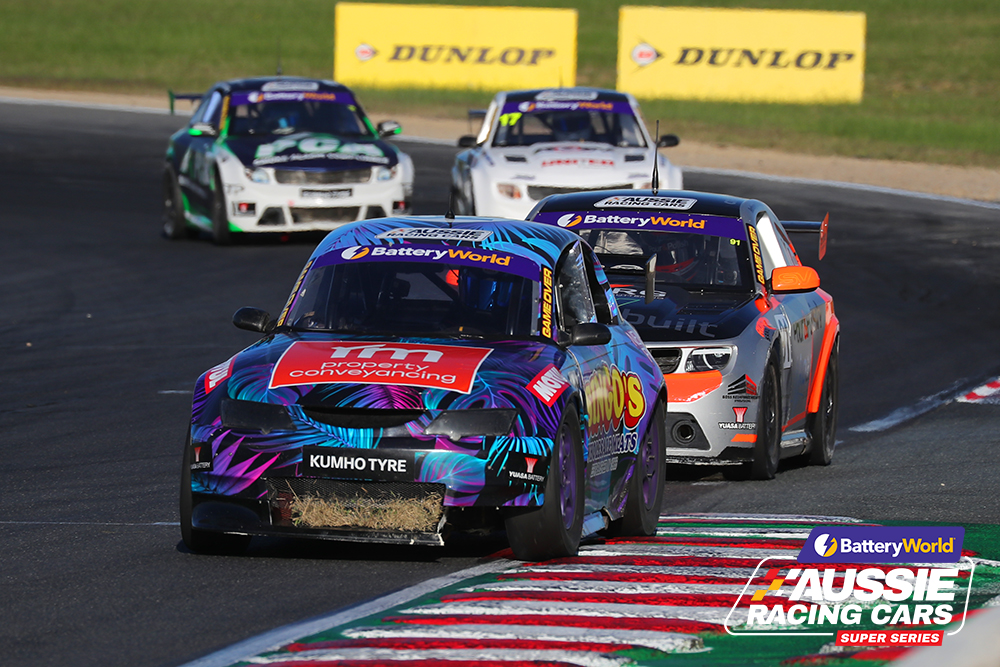 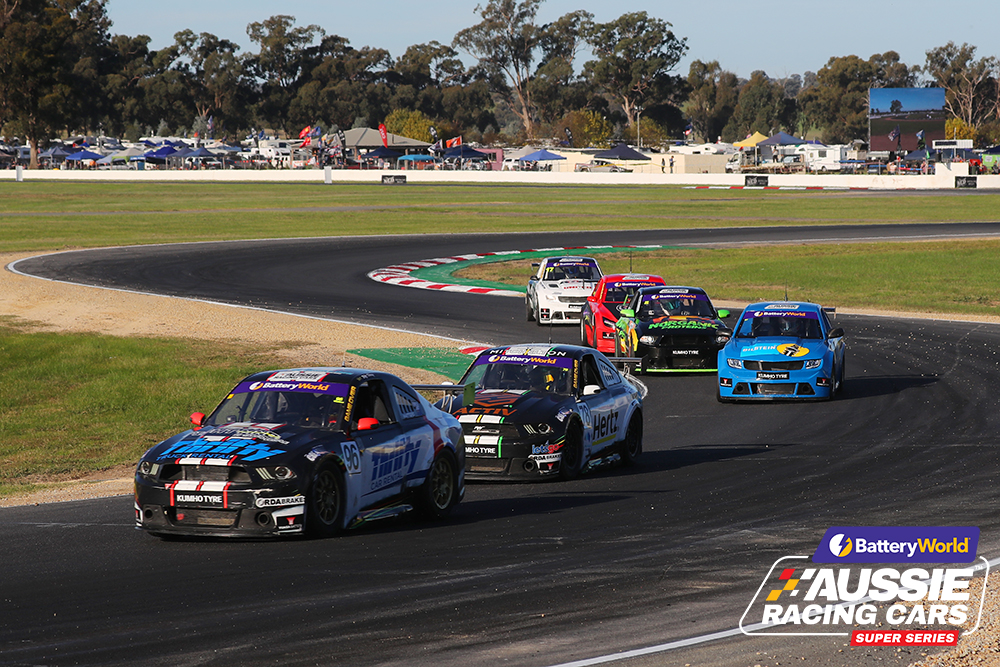 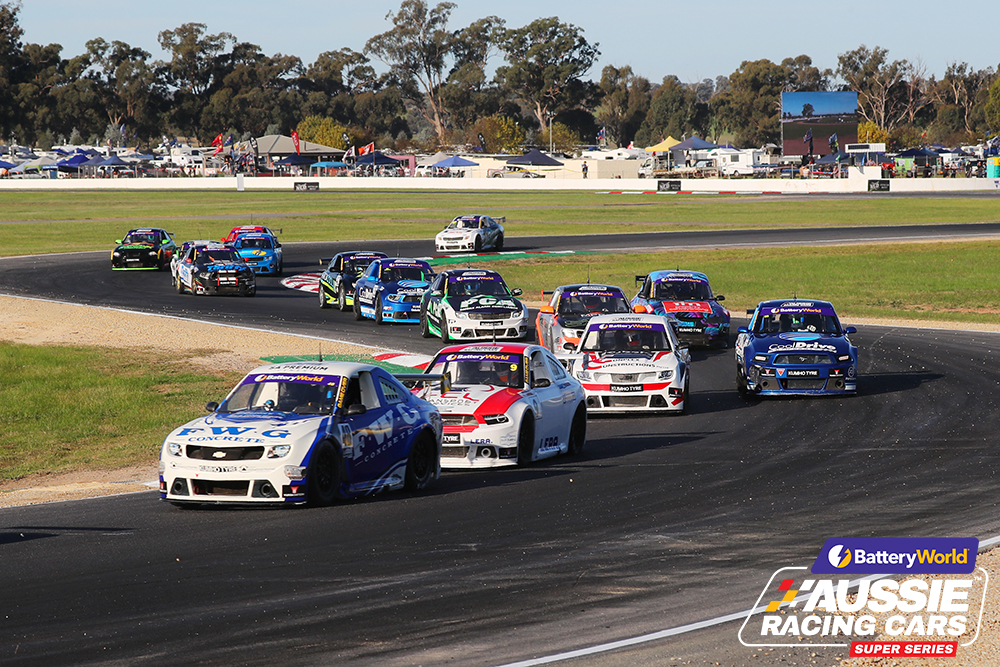 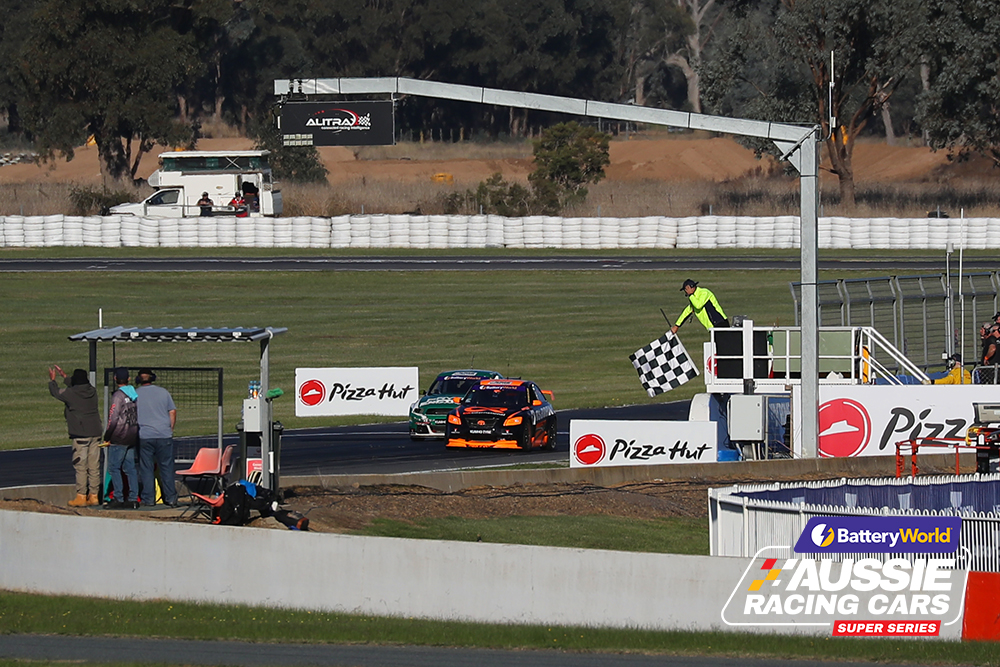 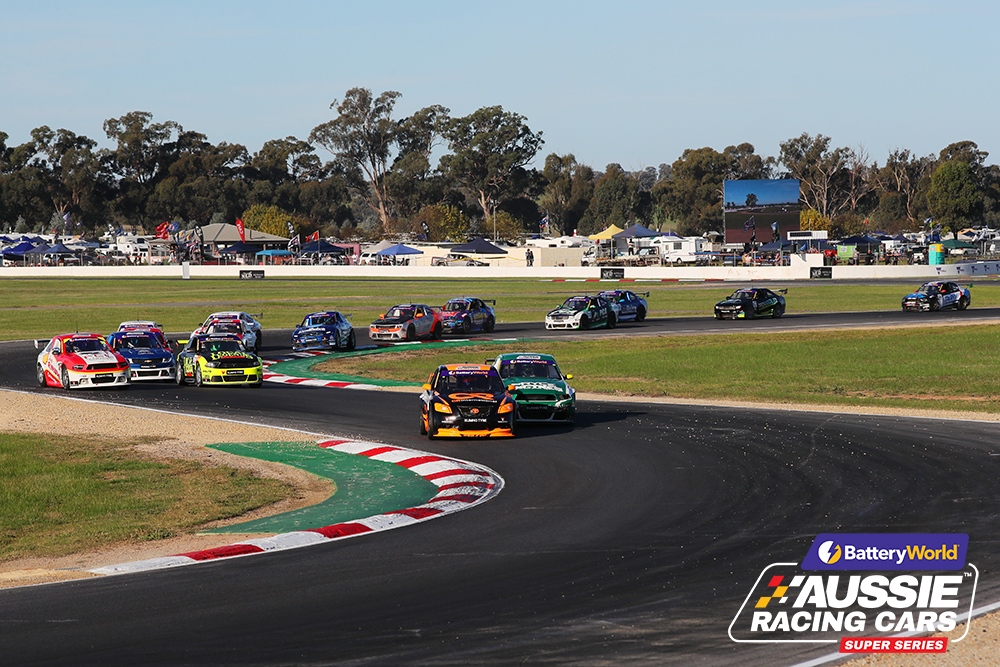 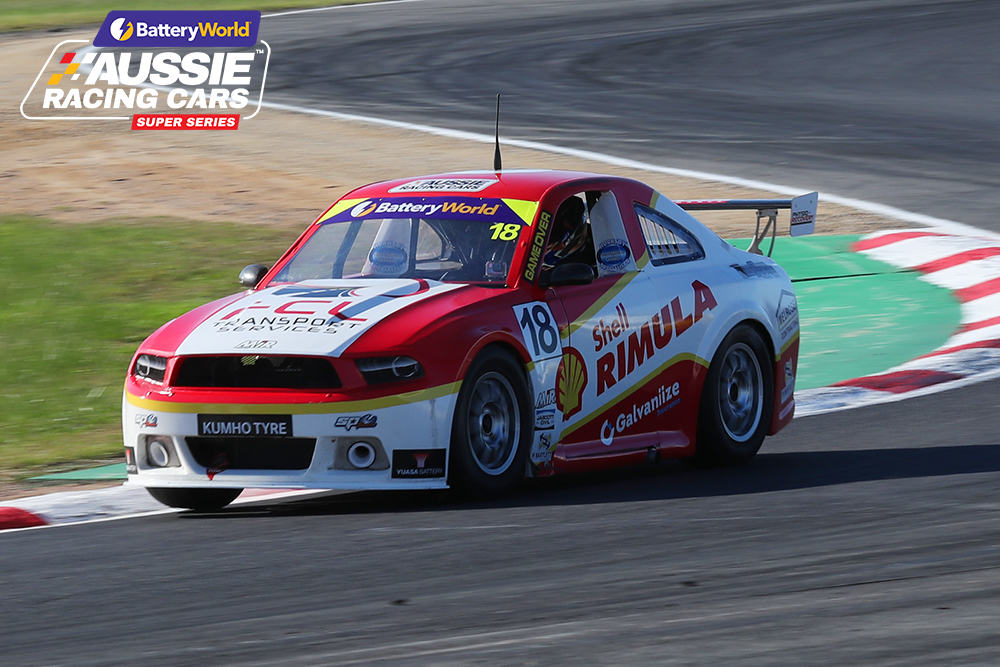 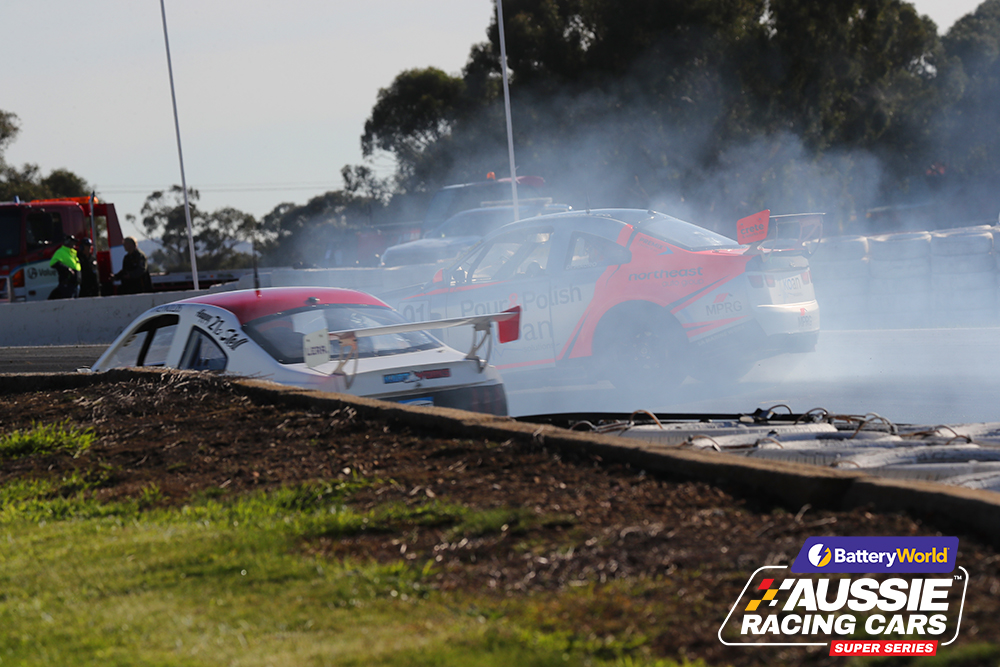 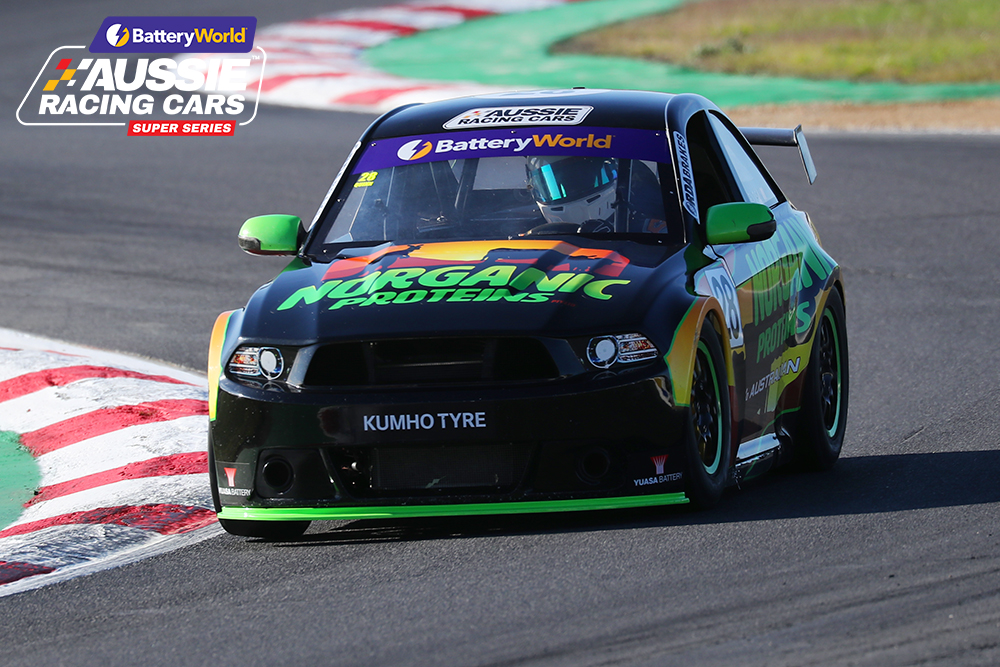 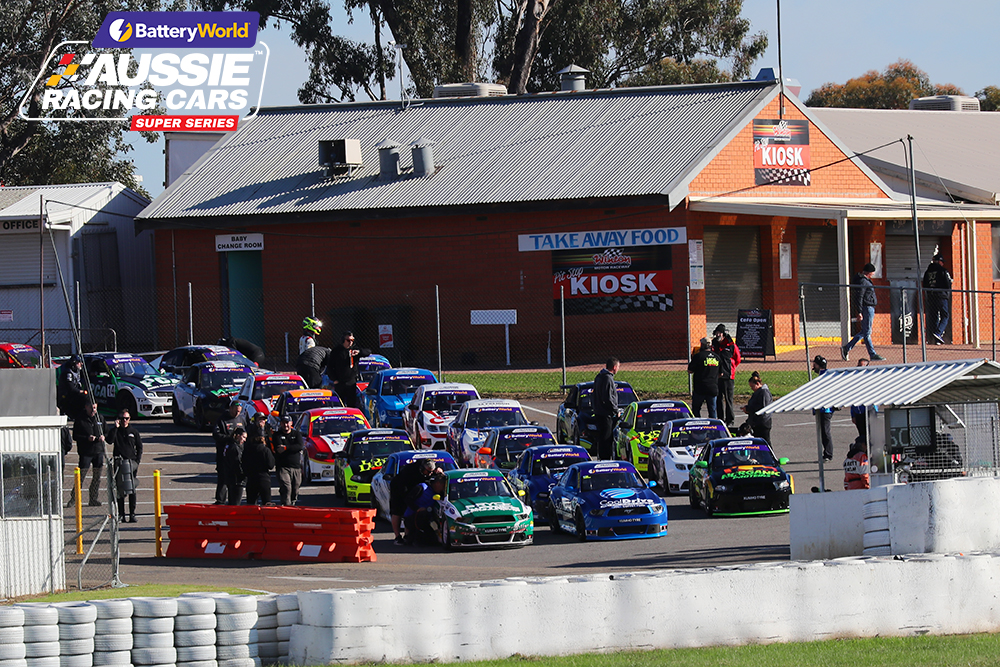 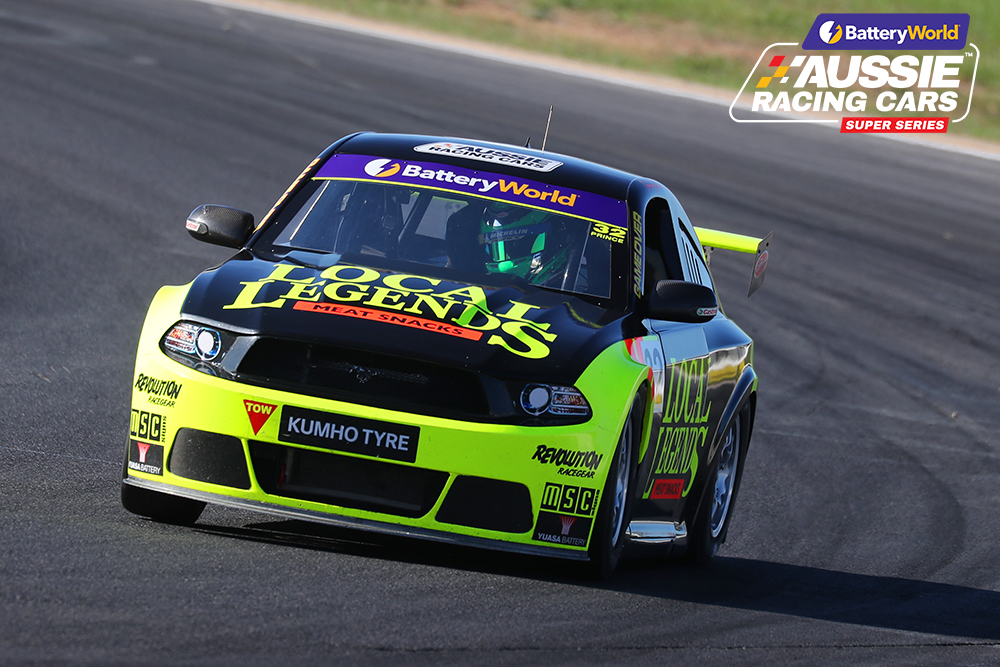