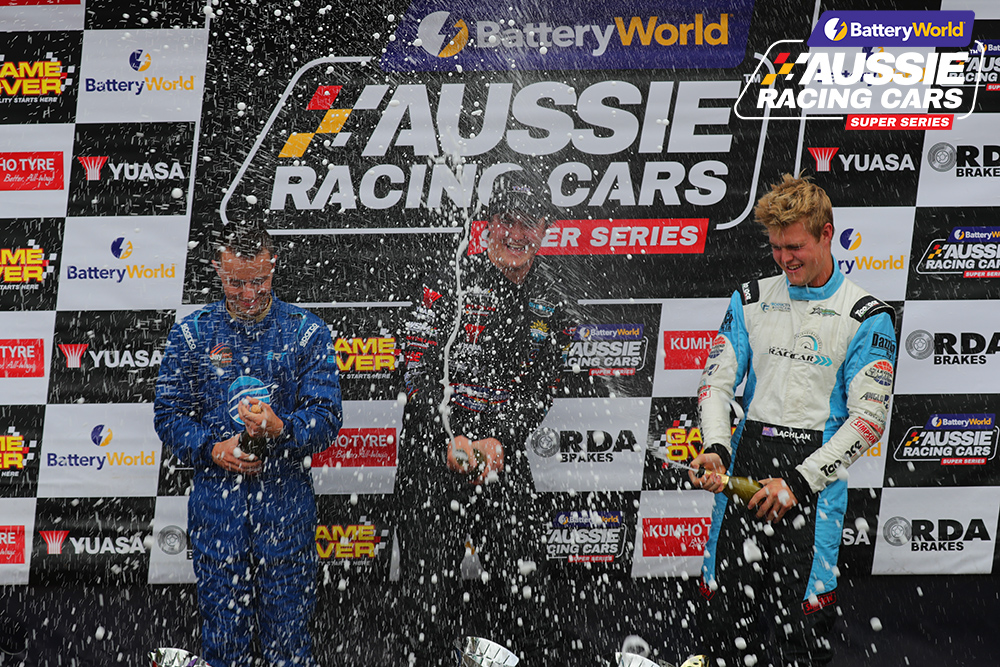 Below are all our race results from the fourth round of the Battery World Aussie Racing Cars at Wakefield Park Raceway, practice, qualifying and four races saw not a single safety car period, a credit to the whole class.

Tom Hayman finished out the third round of the Battery World Aussie Racing Cars they same way he started it, in the lead!  Hayman romped away from the field as soon as the lights went out and again didn’t look back.

The melee behind him were fighting for the last two steps on the podium and more importantly round points, Josh Anderson, Lachlan Ward, Reece Chapman, Joel Heinrich and Kody Garland all could have taken the two places, but it was Anderson and Ward that that came out on top.  The group fought hard with multiple passes taking place early over the 12 laps.

Anderson did try and stick with Hayman but had his mirrors full all race long with the group behind him.

The Local Legends cars of Courtney Price (Mustang) and Ryder Quinn (Euro GT) had a fierce battle in the middle and later stages of the race to be in the top ten, Price would take the spoils in 10th after a coming together of Quinn and Matt Forbes-Wilson in the final turn, Quinn would eventually come home in 19th.

The Battery World Aussie Racing Cars have a short break before round four at the Bathurst 12Hour May 13-15, and then a very 1 week turn around for round five with the Supercars at Winton (May 20-22)

Late entrant (only decided Monday to race this weekend) Kody Garland has won the third race of the weekend, the top 10 reverse grid. Garland started from 8th on the grid and slowly picked his way forward, taking the lead and control of the race on lap 6 of 12.

Double race winner from yesterday and series leader Tom Hayman started off 10th and finished second banking good points for the round and series.

The reverse grid front row starters of Courtney Price and Nicklaus Lichtenberger both got great starts along with Leigh Bowler.  Lichtenberger left the track at turn 4 it wasn’t clear if he was escorted off, he would eventually recover to finish 16th, Price continued her battles and came home in 8th spot. Bowler dropped back to 12th.

By far the brightest looking car of Cody McKay had a spin mid-pack at turn two in the middle of the track, those around him somehow managed to avoid the spinning Commodore, he would recover to be 20th at the chequered flag after starting 12th.

Not running on Saturday saw Matt Forbes-Wilson start from the rear of the grid, he worked his way up to 14th.

The Battery World Aussie Racing Cars have had race two of the third round at Wakefield Park yesterday afternoon, the closing event for Saturday.

Tom Hayman was on top but he had to work hard for the win over Lachlan Ward, the pair battled over the entire 12 lap race. Ward was determined to get past but couldn’t find the opportunity on the short 2.2km circuit.  Hayman managed to just hold on to the end after continually locking the right front tyre going into turn 8 in the latter stages of the race.

Third placed was Kody Garland, whom had a battle on his hands with Josh Anderson, Reece Chapman and Ryan Reynolds, you could throw the preverbal blanket over the four with a few rubbing is racing moments noted but no penalties given.

Joel Heinrich started from the rear of the grid after his race one DNF, he fought his way up to 15th one place ahead of his sponsor Brett Osborn with the Osborn’s Transport Cruze and Camaro’s having a great duel.

Wakefield Park suits the pocket rockets with both high and low speed corners, the category is renown for close racing and has been even more so this weekend.  Feedback from the drivers has been positive overall.

Race 3 will be a top 10 reverse grid and gets underway at 9.50am and will be on the ASBK Facebook page which we will share on the Aussie page, and the final race for the weekend kicks off at 12.35pm this afternoon.

The third round of the Battery World Aussie Racing Cars is at Wakefield Park Raceway and the series leader Tom Hayman continued his run of dominance over the rest of the chasing pack taking the win.

He led the charge into turn one and didn’t look back, Lachlan Ward, Kody Garland, Josh Anderson and Reece Chapman kept him in sight but could not challenge.  All four were vying for second and third spots on the podium. Anderson got the jump from the start but dropped to fourth on the first lap.  Garland settled into second early in the race but Ward managed to get past mid race to finish in second spot from Garland who was kept busy keeping Anderson behind him.

Chapman was home fifth from Ryan Reynolds sixth, Courtney Price drove a great race to move up from tenth at the start, she finished 7th, Nicklaus Lichtenberger was 8th, Leigh Bowler and Anthony DiMauro rounded out the top 10.

Joel Henrich pulled up at turn two on lap eight with apparent engine issues and Cody Brewczynski failed to finish coming into pitlane on lap 7.

The second race gets underway late this afternoon at 4.25pm local time.

The Aussie Racing Cars next head to Bathurst to support the Bathurst 12HR 13-15 May. 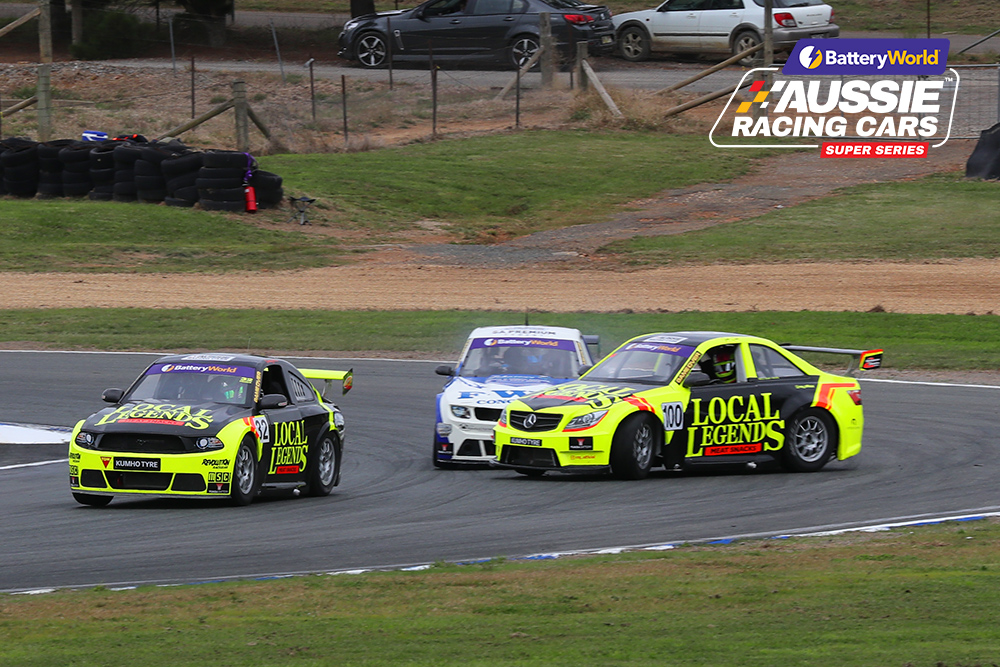 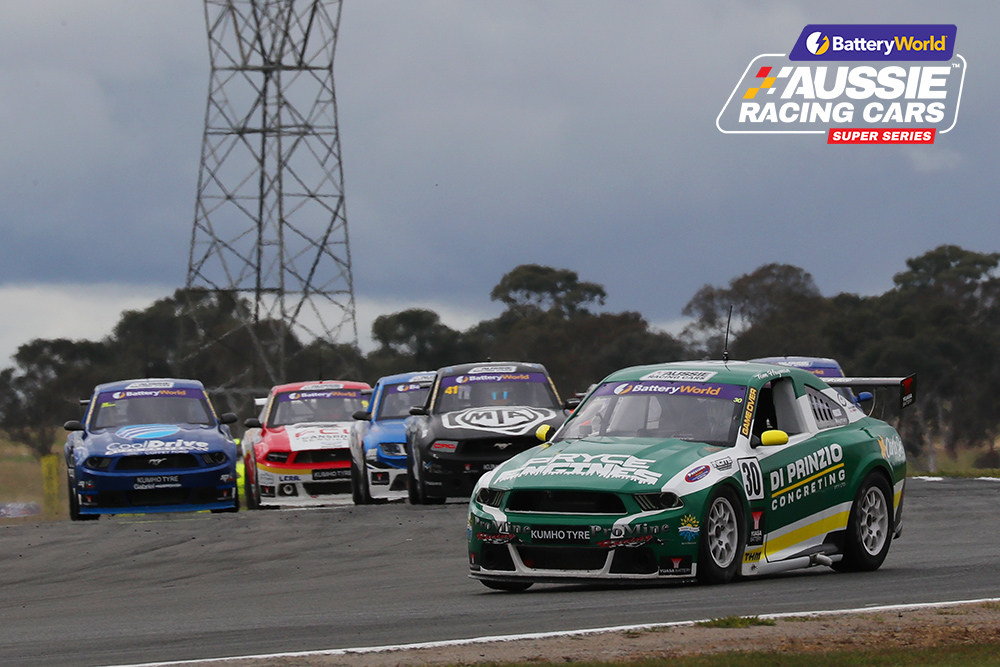 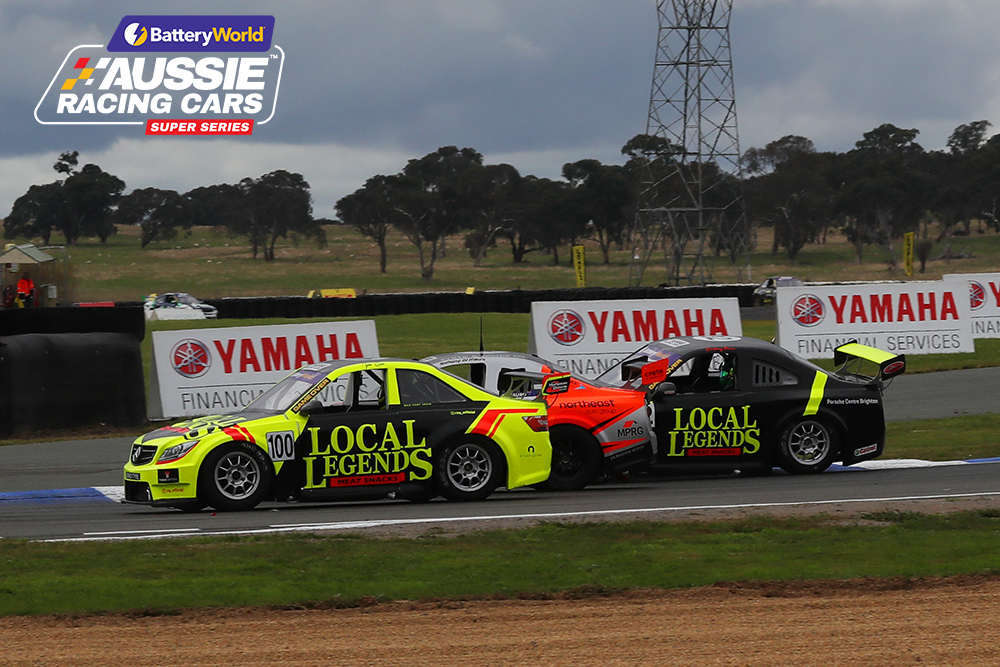 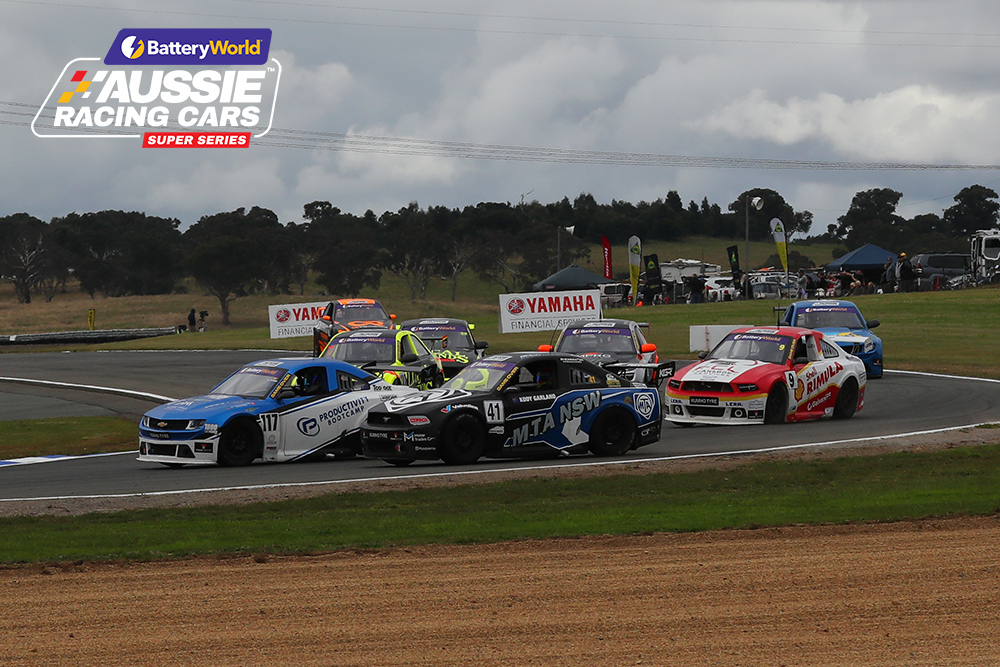 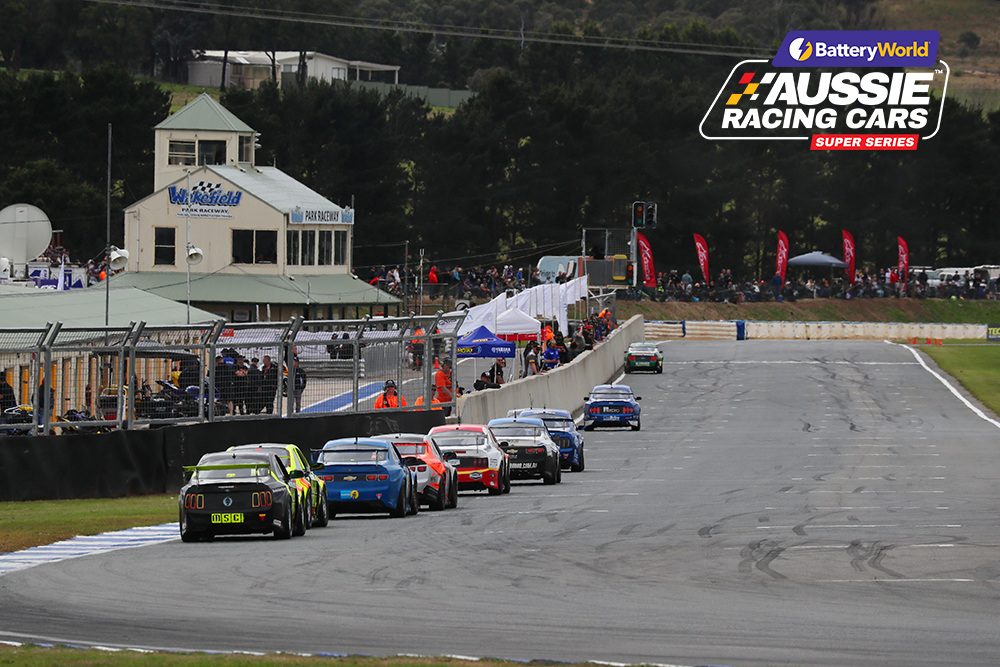 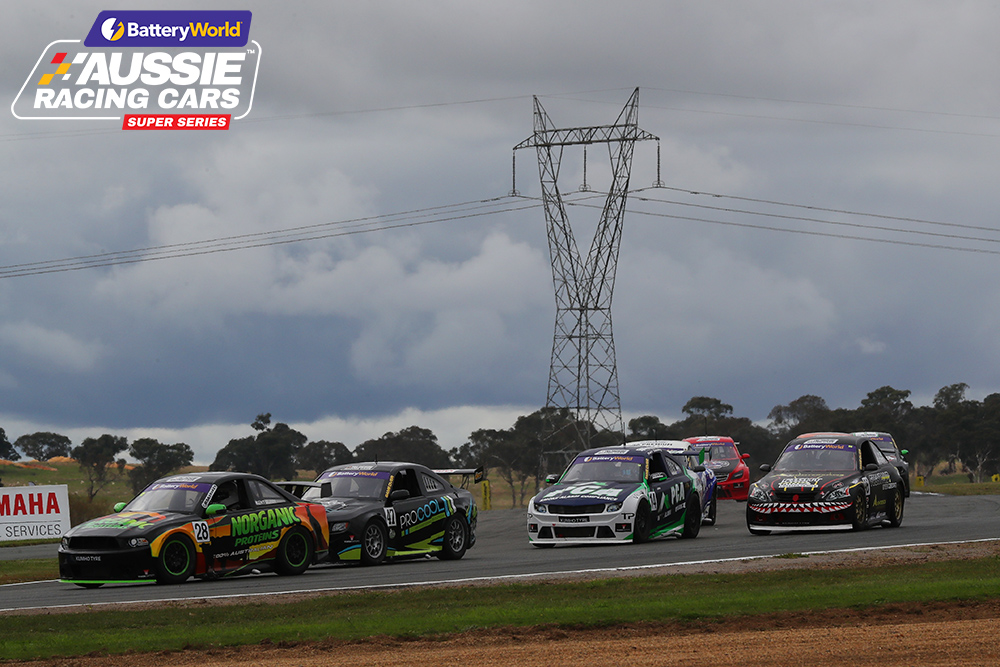 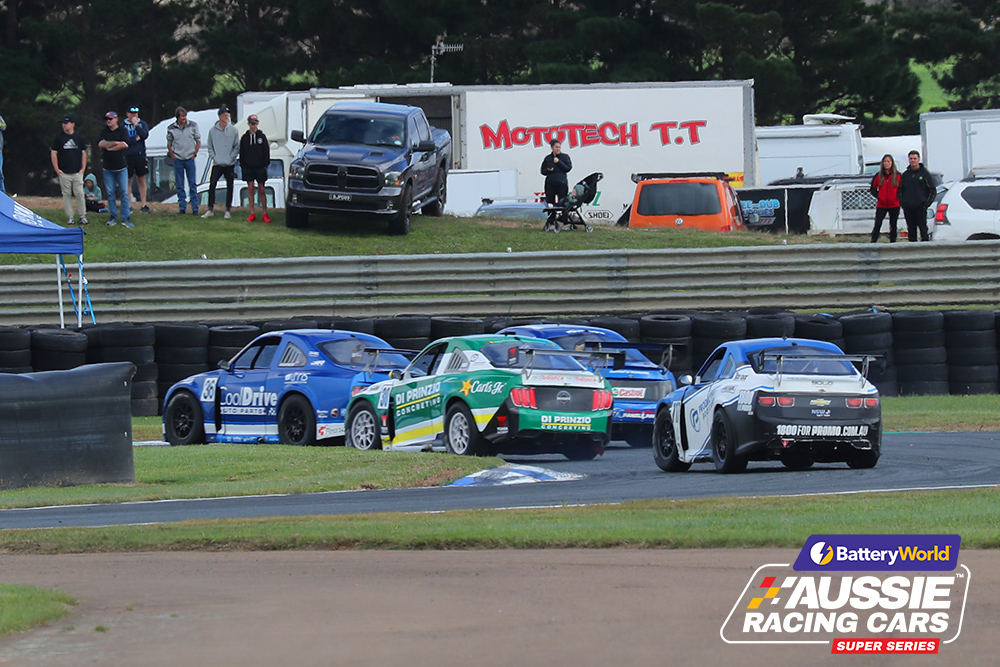 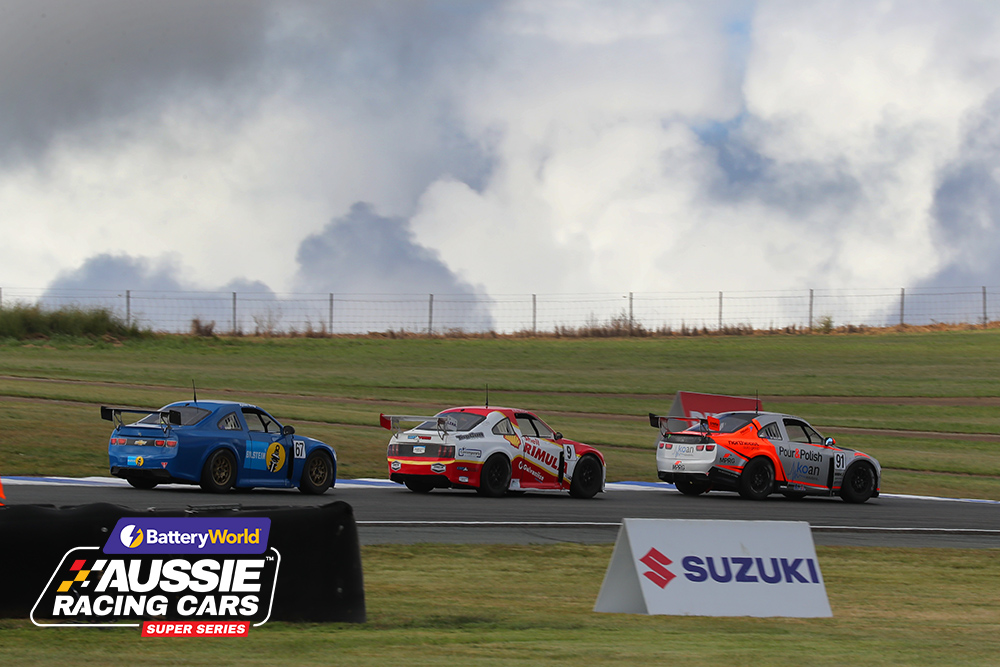 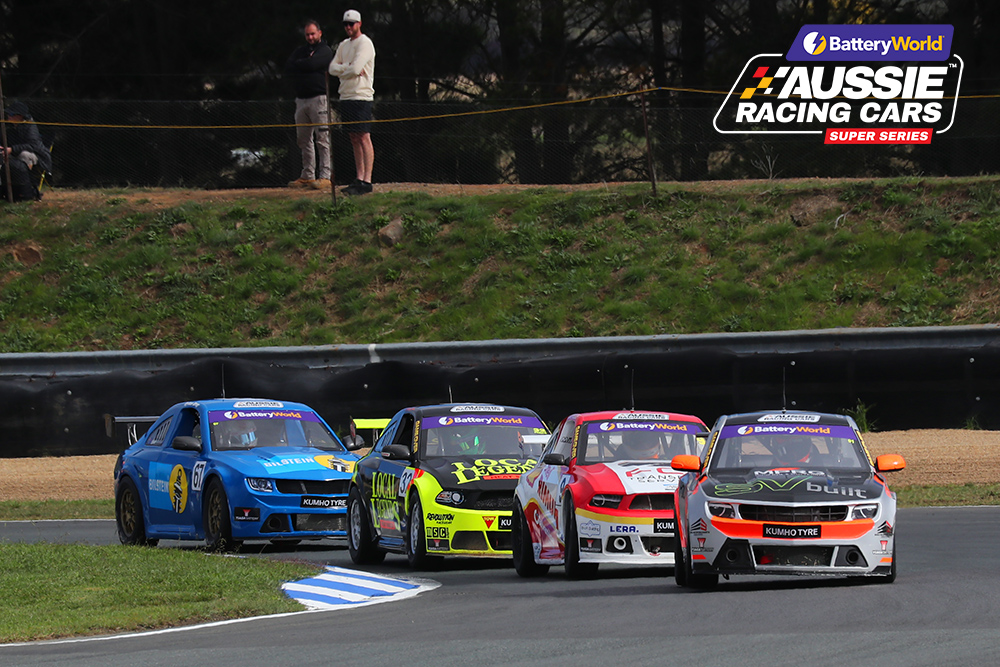 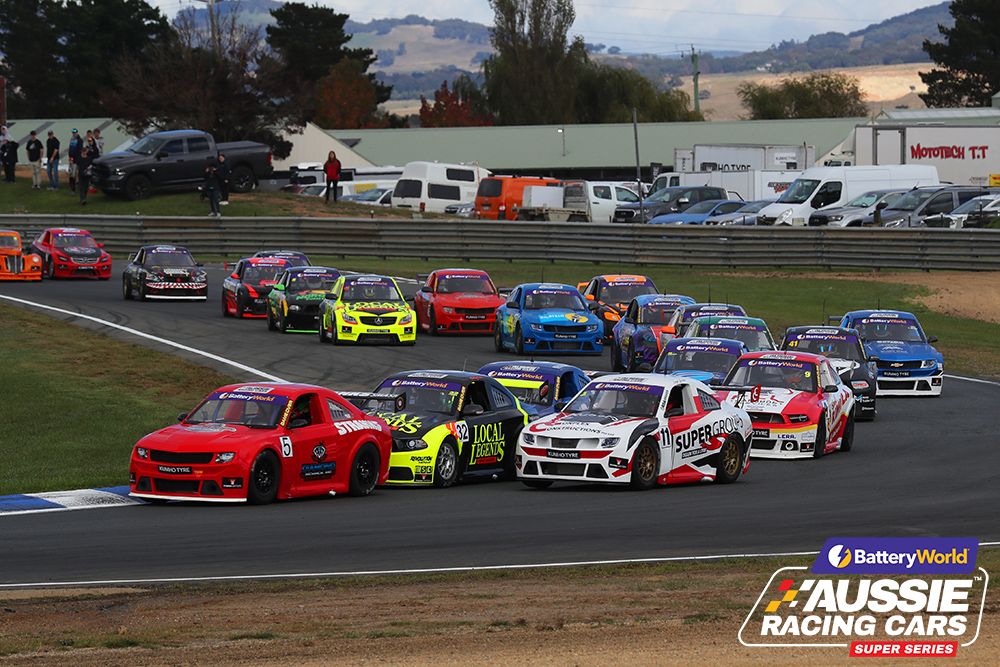 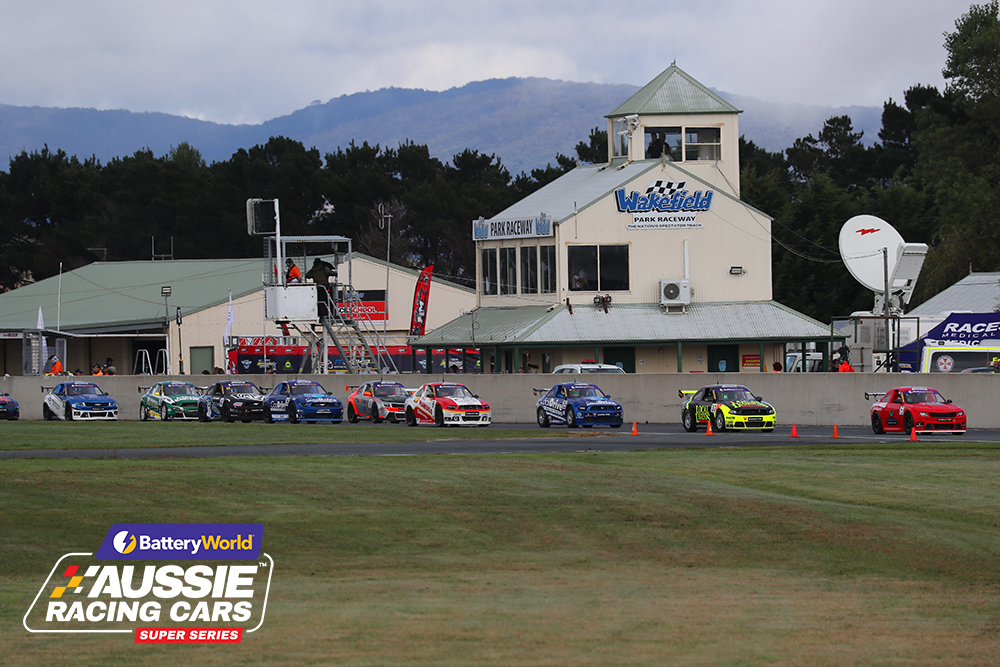 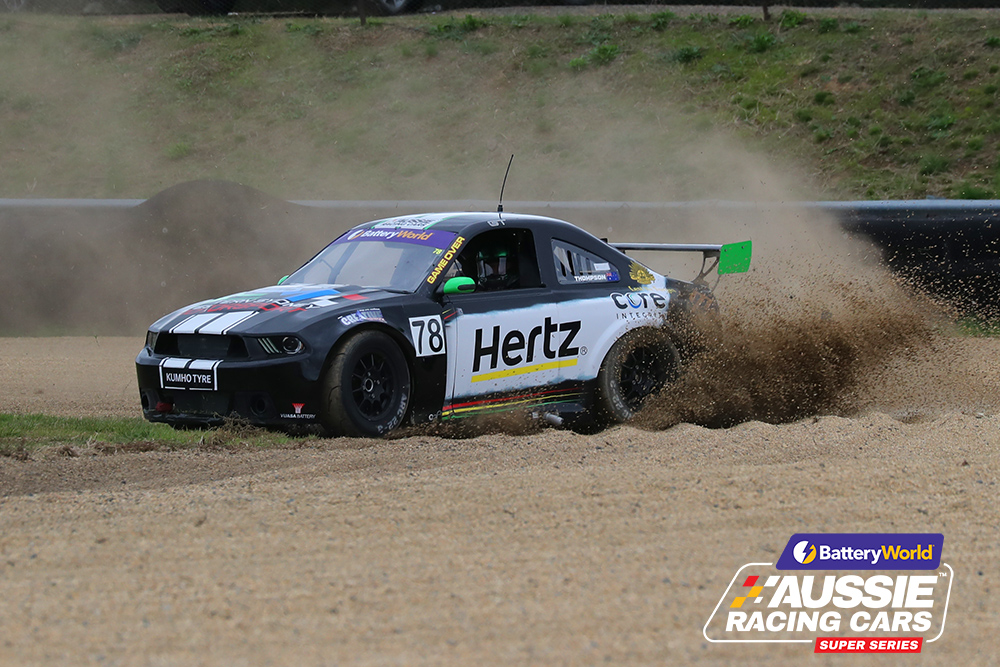 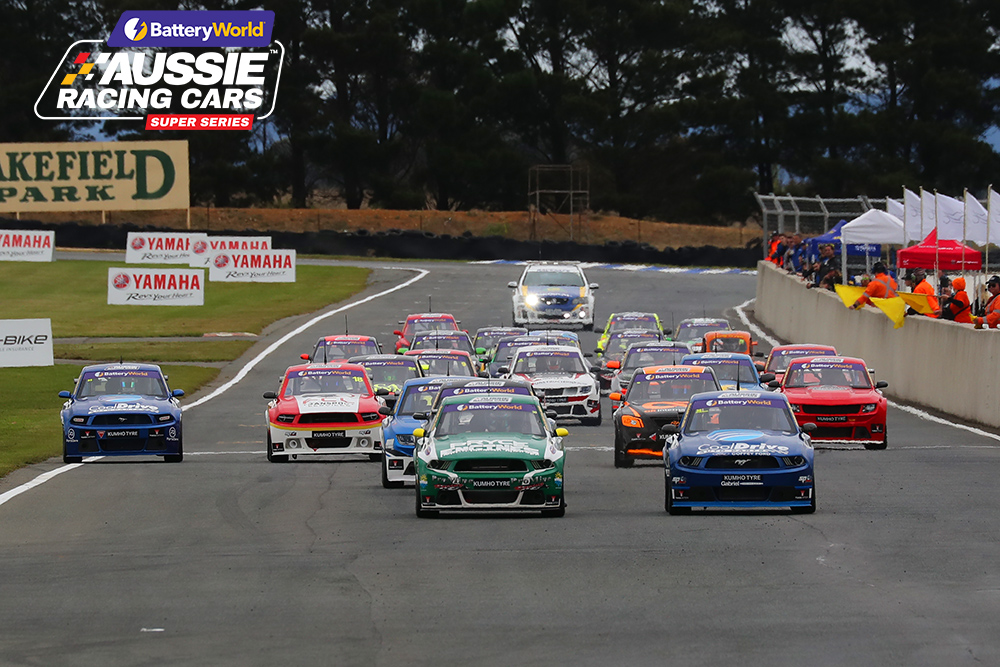 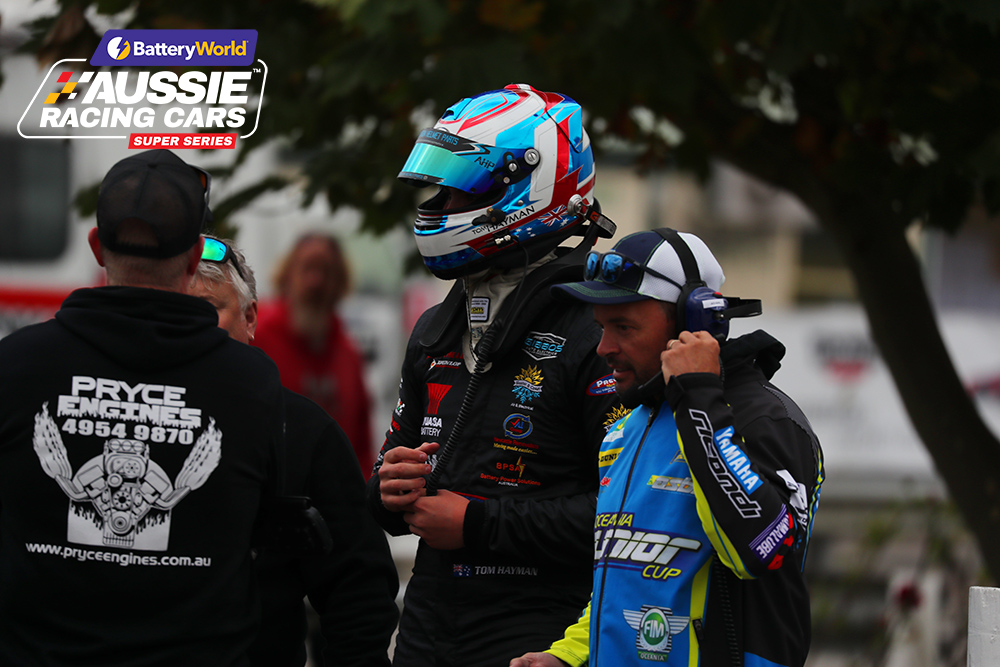 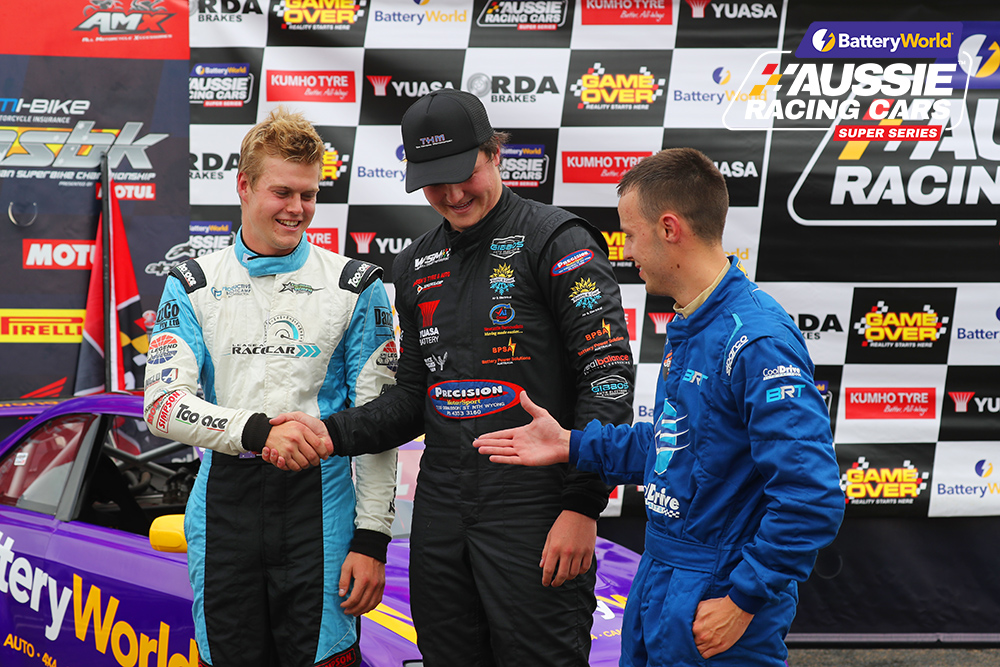 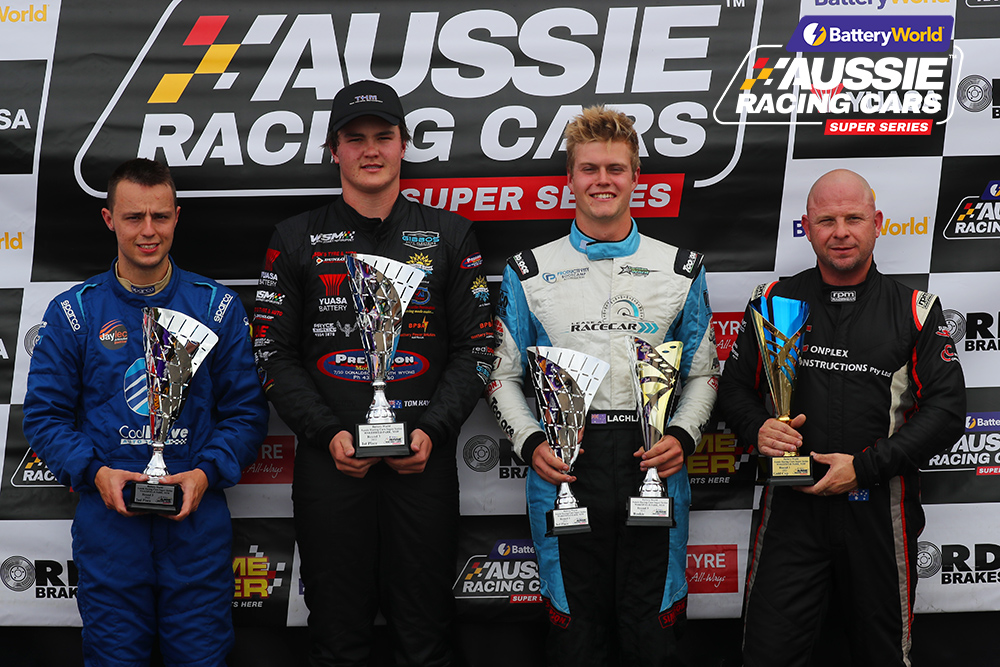 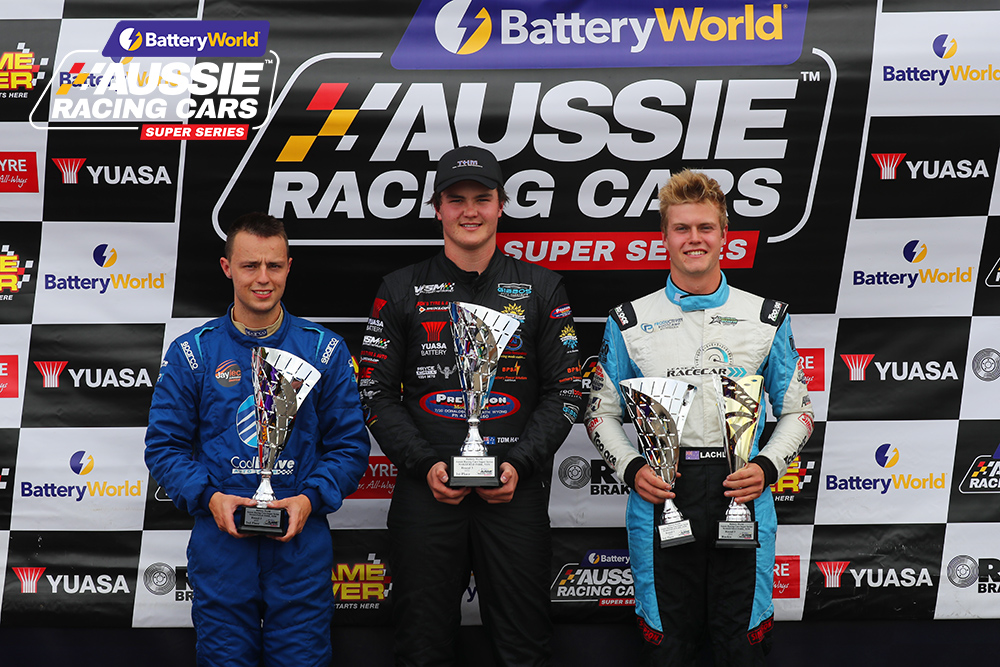 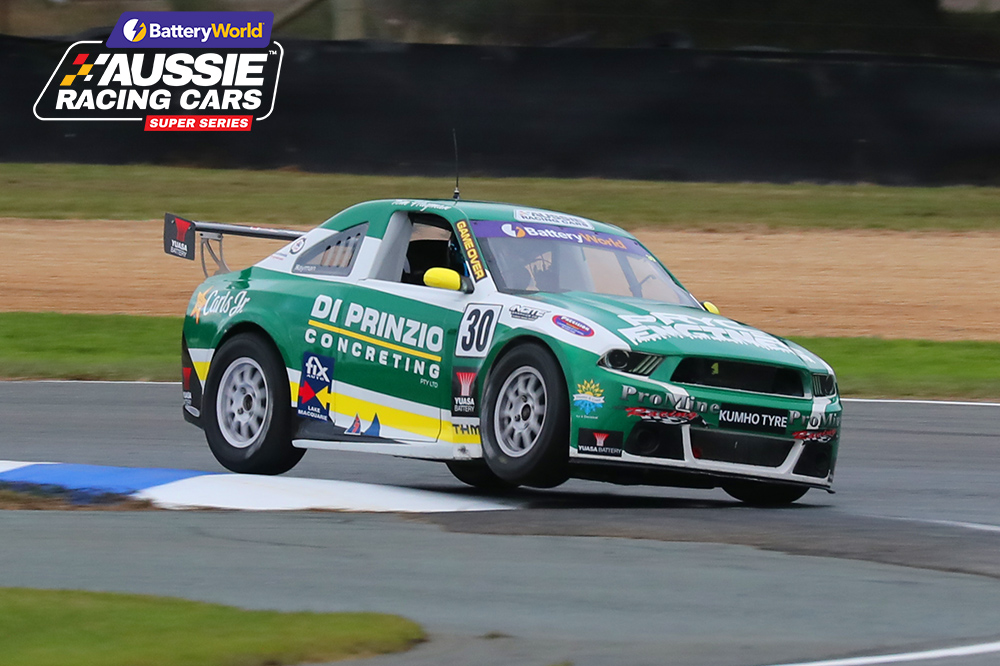 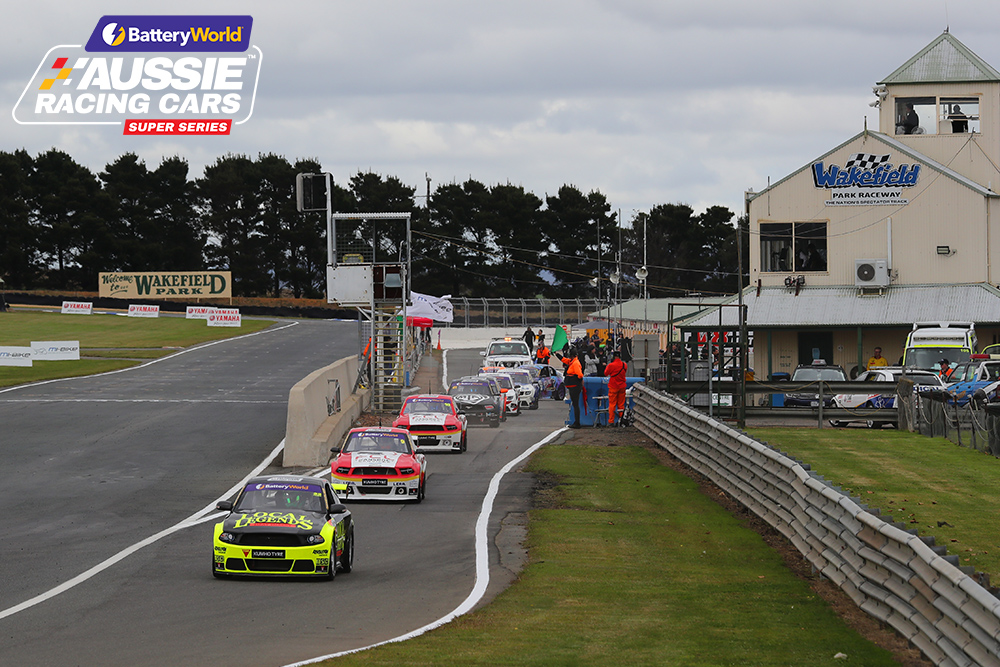 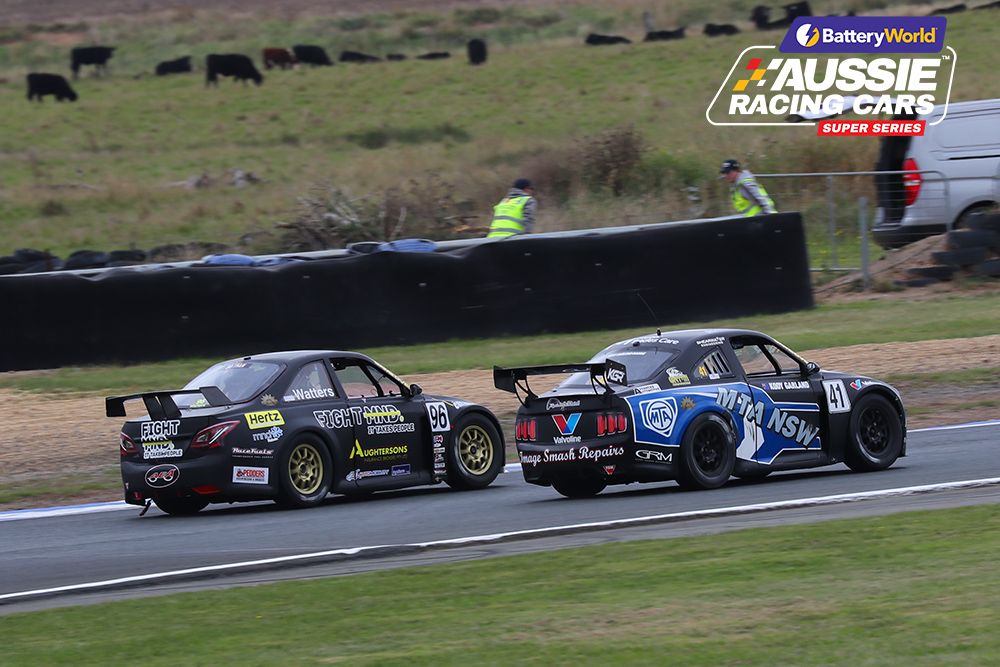 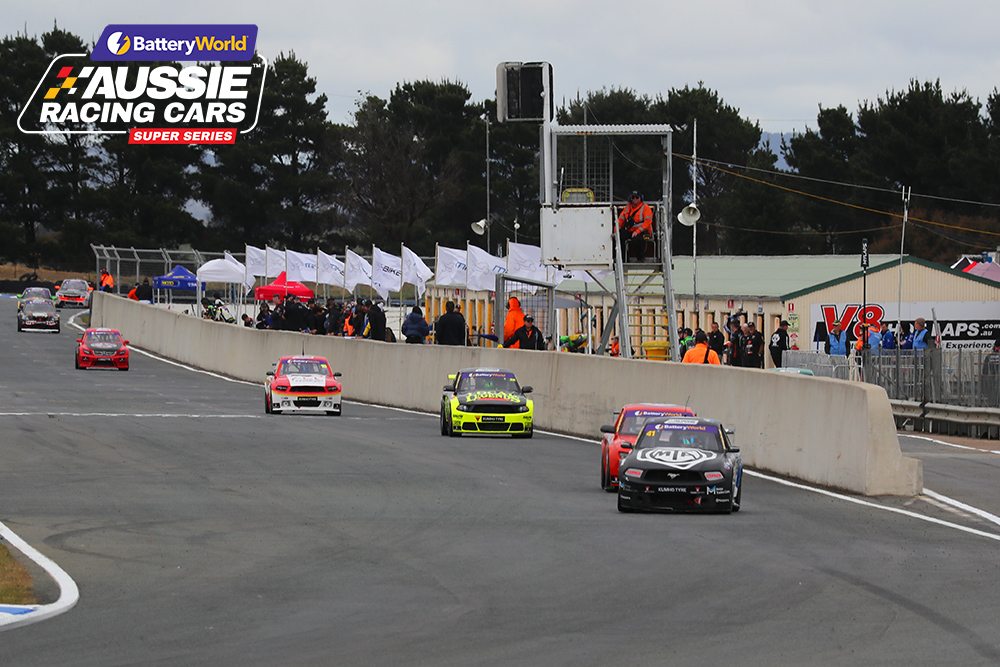 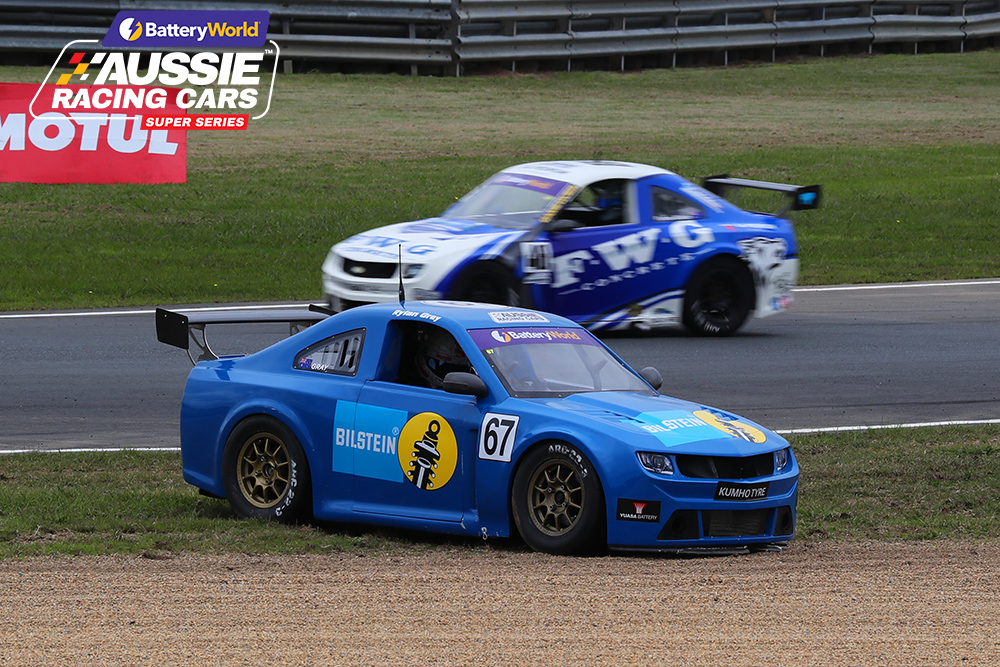 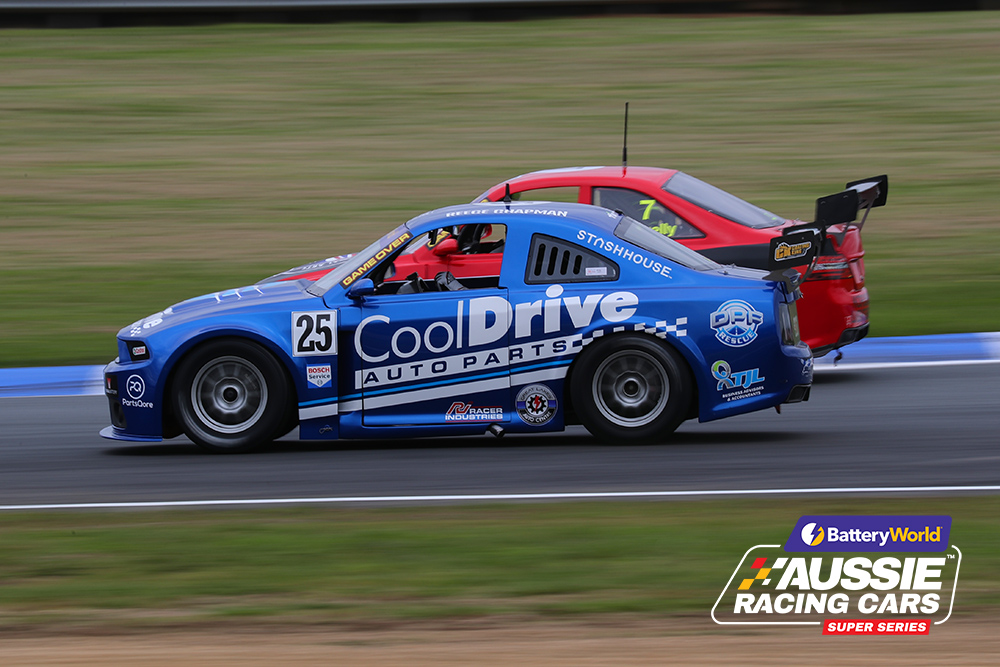 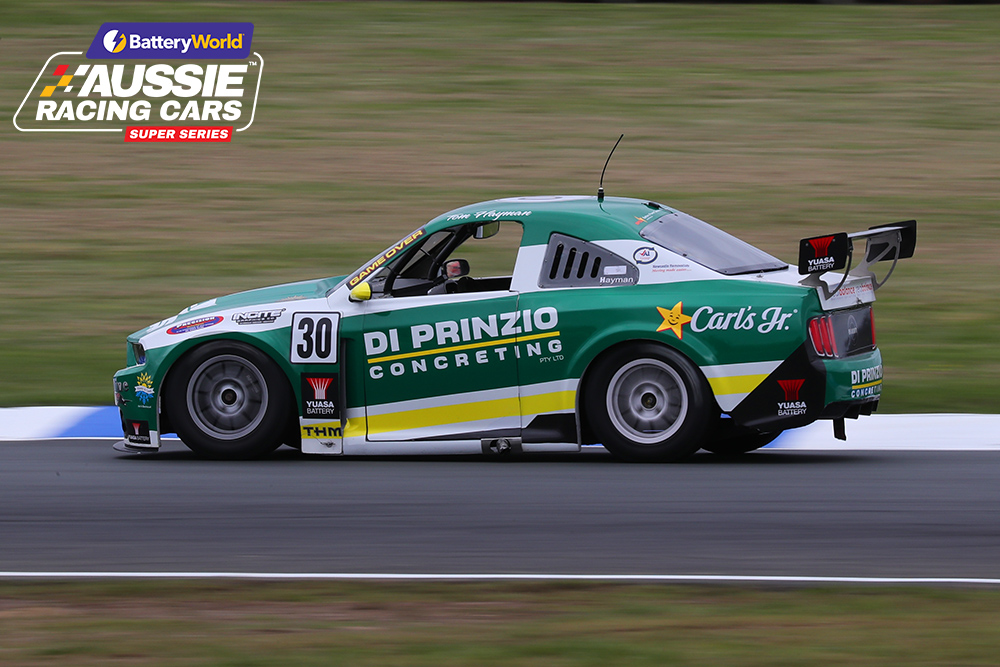