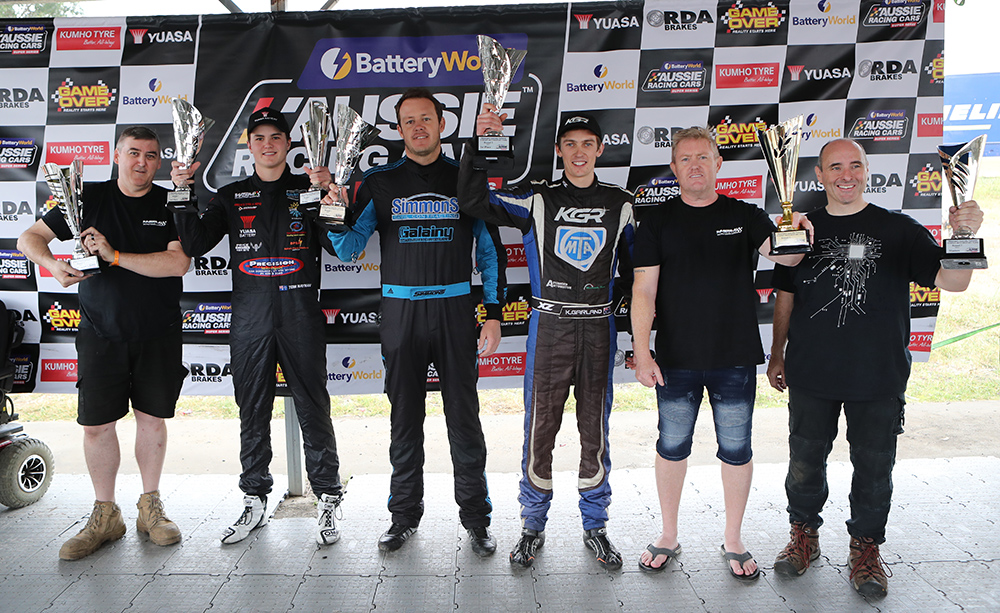 Round 3 of the Battery World Aussie Racing Cars was another great weekend of racing, our weekend is all done and the championship places have been decided and the trophies handed out on our podium.

For this round, the Battery World Aussie Racing Cars second race at Sydney Motorsport Parkwas with the top ten from race one reversed. Kody Garland came through for the victory from position six after dropping to 9th on the opening lap.

The NSW MTA Mustang driver fought tooth and nail to get to the front against the best the category could offer. He won by 0.36 seconds over Nick Simmons (Simmons Civil Contracting Camaro) and Western Sydney Motorsport’s Craig Woods in his Buttsworth Industrial Mustang.

WSM team-mates Matt Nolan and Craig Thompson were on the front row for the start. Thompson won the start and led while Nolan slipped quickly down the order. At the end of the first of nine laps, Thompson was tentatively ahead of Woods with Reece Chapman (Castrol Camaro) third in front of Simmons, Joel Heinrich (Osborn Transport Cruze), Tom Hayman (Yuasa Battery Mustang), and Josh Anderson (Perenso/RDA Brakes Camaro).

Shortly after they started lap two Woods hit the front only to be passed by Simmons before they completed the lap. Anderson was up to third but the race one winner’s chance of going back-to-back evaporated when the clutch basket went at turn six.

Woods regained the lead by the end of lap three only to lose out to Simmons for the next five. In the interim Garland slotted into third, which became second at mid distance. On lap eight, Garland hit the lead, one he would hold to the end.

Hayman overcame tyre smoke (from a rub on a rear guard) to pass Heinrich on the last lap to take fourth. Chapman chased the pair across the line and was elevated one spot when Heinrich copped a five-second penalty. Heinrich’s team-mate Brett Osborn (Camaro) who was seventh, also had five seconds added and dropped a spot to Thompson.

Adam Clark (Camaro) and Cody Mckay (Commodore) filled out the top ten. Just behind them came Grant Thompson (Mustang), Kent Quinn (Aurion) and Scott O’Keefe (Altima). In 14th, Ian Chivas pipped Tony Quinn (Euro GT). The latter’s grandson Ryder (Euro GT) was up to sixth and mixing it with the front runners when he was forced to park out of harm’s way after four laps, he ran wide and damaged to the front splitter then took a wire off the fuel pump.

POINTS LEADER Josh Anderson kicked off round three of the Battery World Aussie Racing Car Series with victory in race one at Sydney Motorsport Park last night. He also set a new lap record of 1:42.0702 previously set by James Duckworth back in 2017.

The Perenso/RDA Brakes Camaro driver had a hard-fought battle with pole sitting rookie Tom Hayman in a Western Sydney Motorsport Mustang and crossed the finish line 0.3 seconds ahead after they swapped the lead on several occasions.

Then Hayman was slugged with a post-race five second penalty. Because the two were well clear of their opposition, he was able to hold on to the runner-up position.

Both Cody Mckay (Commodore) and Nick Lichtenberg (Altima) had lonely runs to 13th and 14th respectively, but it was more hectic for the next spot where Adam Clark (Camaro) surfaced ahead of Tony Quinn (Euro GT) after the pair came together at the final turn on the opening lap and Grant Thompson (Mustang) came home in 16th.

Rookie Tom Hayman Motorsport in his first season of Aussie Racing Cars, with a round one 16th overall and then a fourth at round two, has qualified fastest for race one at round three tonight.

For the first time the Battery World pocket rockets have undertaken their grid decider in the dark and under the lights at Sydney Motorsport Park – as part of the extravagant Shannons Motorsport Australia Championships second round.

In his Mustang-bodied Aussie Car, running out of the Western Sydney Motorsport stable, Hayman set his benchmark 1 minute 41.8473 second flyer on just his second lap, and left his more experienced rivals to catch him if they can.

Of Hayman’s 23 rivals, Josh Anderson was the closest, second fastest in his Perenso Camaro, 0.22 seconds slower after he topped the times in the preceding practice session. Behind him came Nick Simmons (Simmons Civil Contracting Camaro), Joel Heinrich (Osborn Transport Cruze) and Kody Garland (MTA NSW Mustang) who was second earlier in the day.

Sixth fastest was WSM’s Craig Woods (Buttsworth Industrial Mustang) ahead of Brett Osborn, another rookie, but in his first ARC race meeting aboard his Osborn Transport Camaro after a stellar career in HQ Holdens.

You can see the full gallery of images here:

Our next round number four is at Morgan Park Raceway 25-27 June at Warwick Queensland. 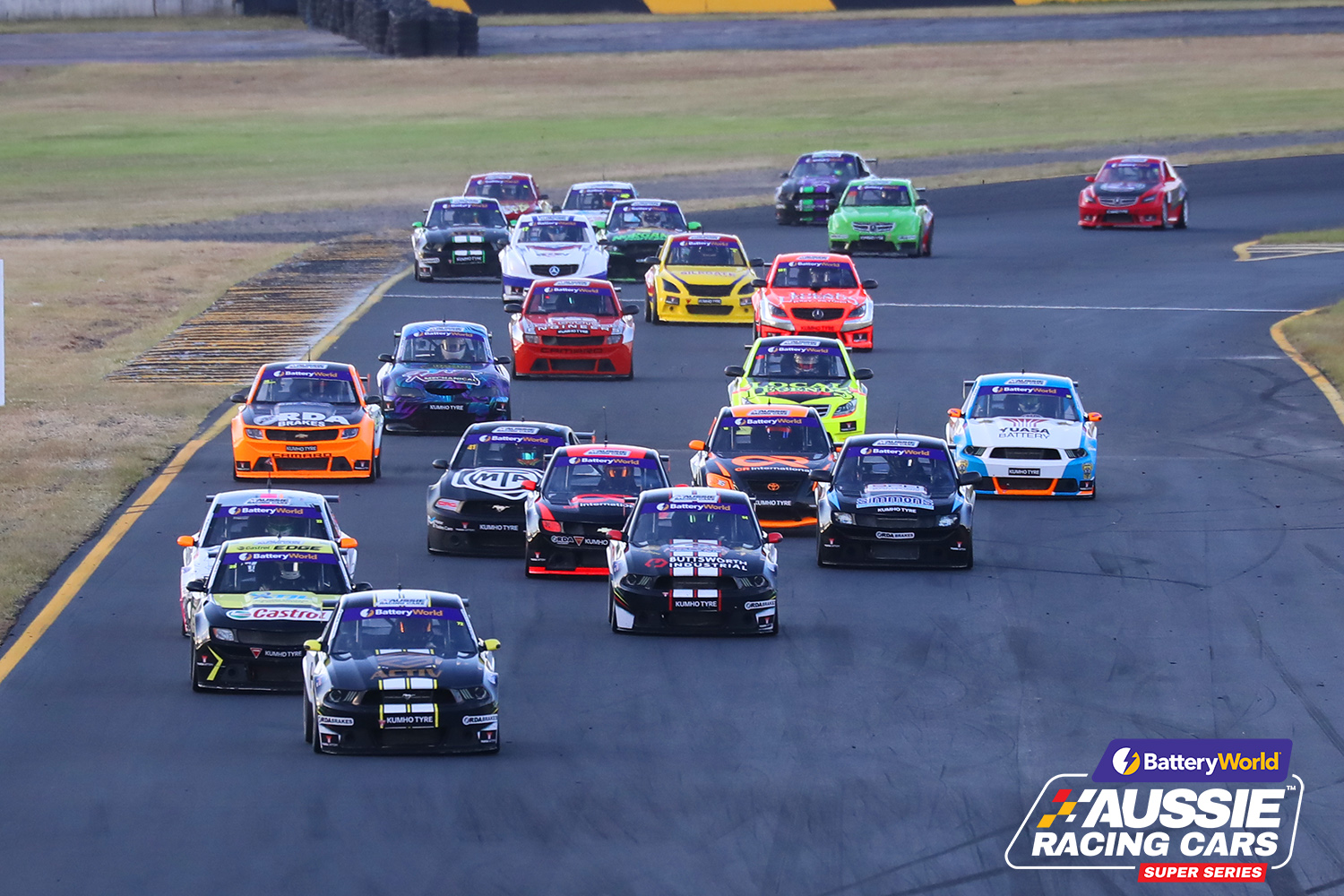 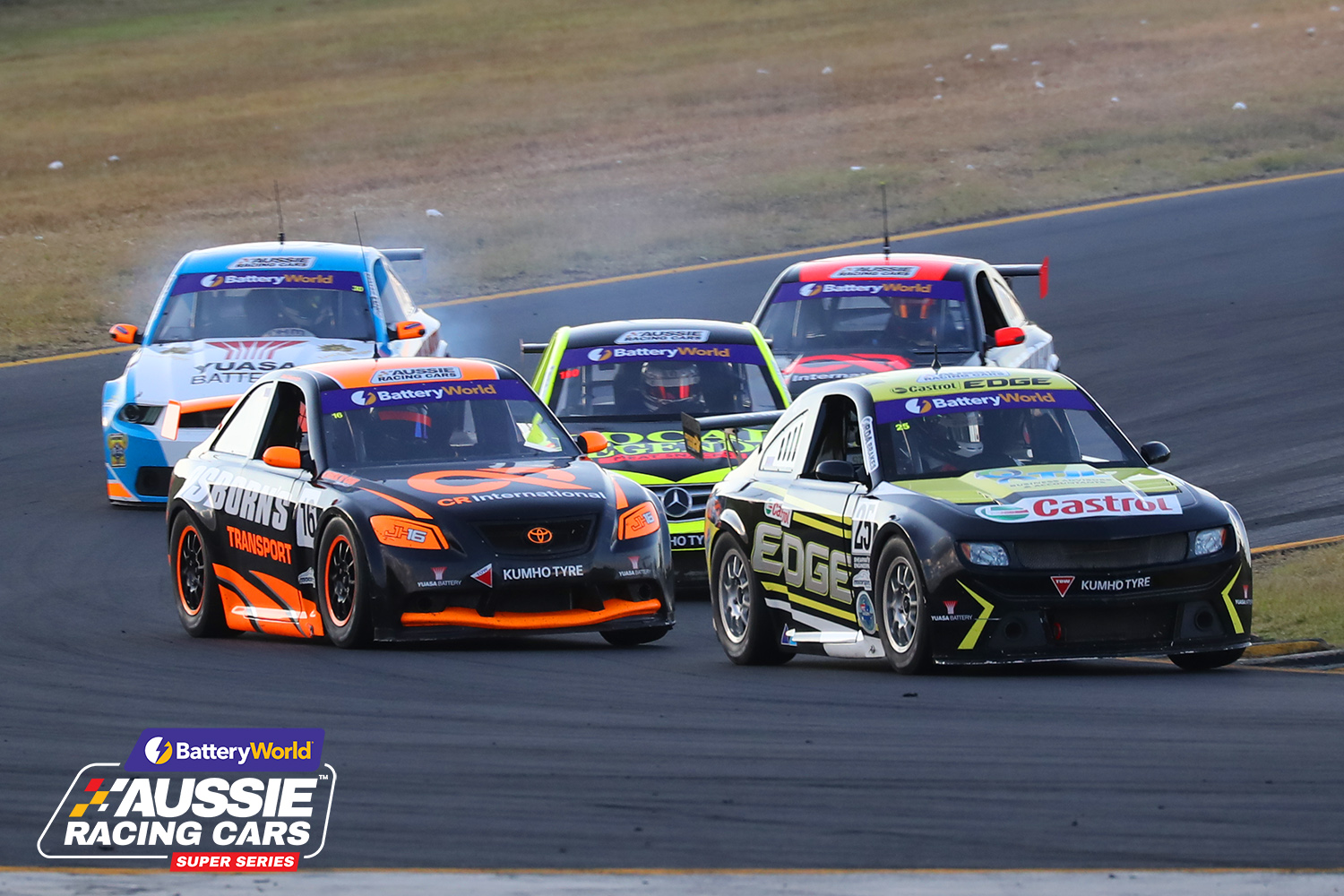 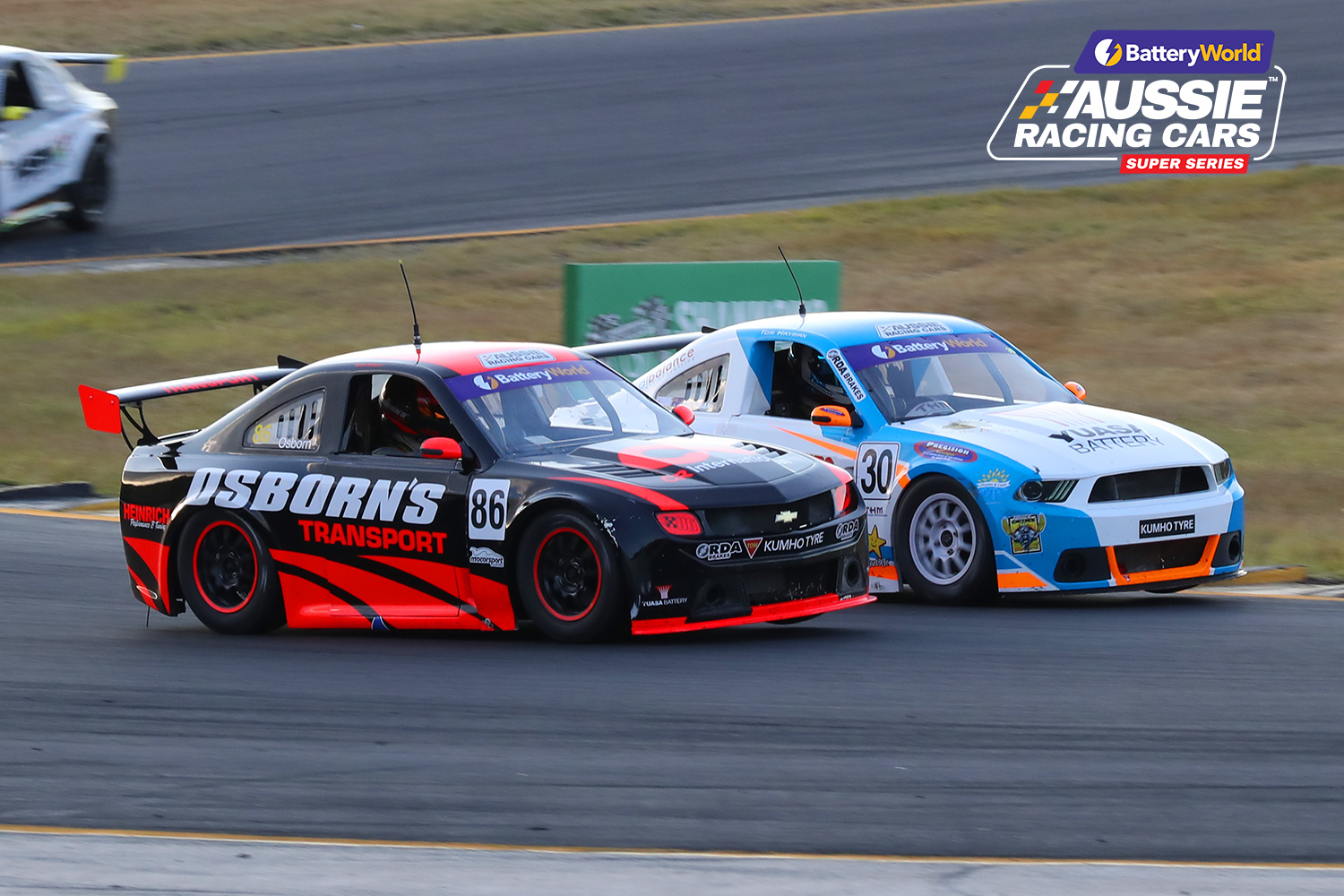 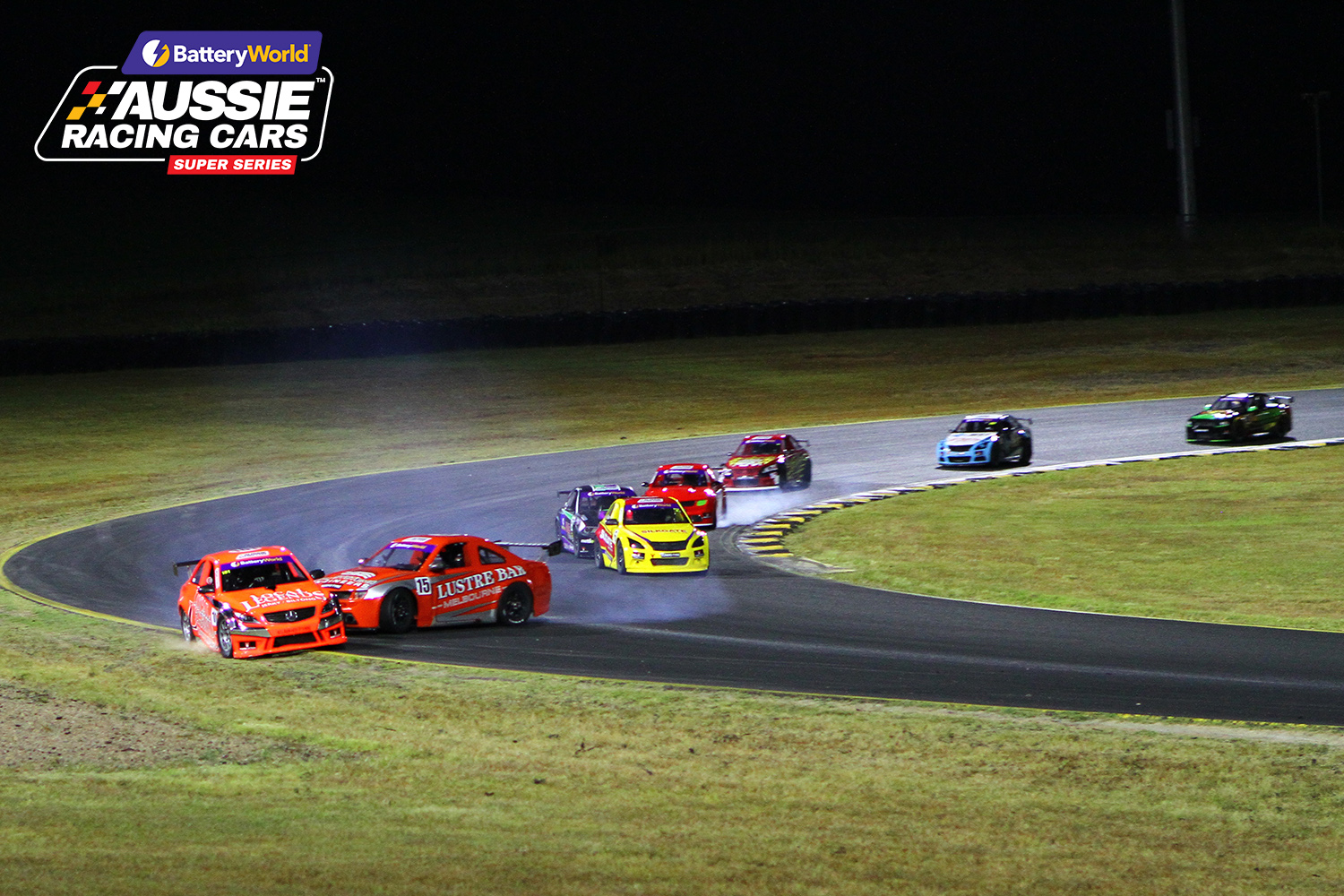 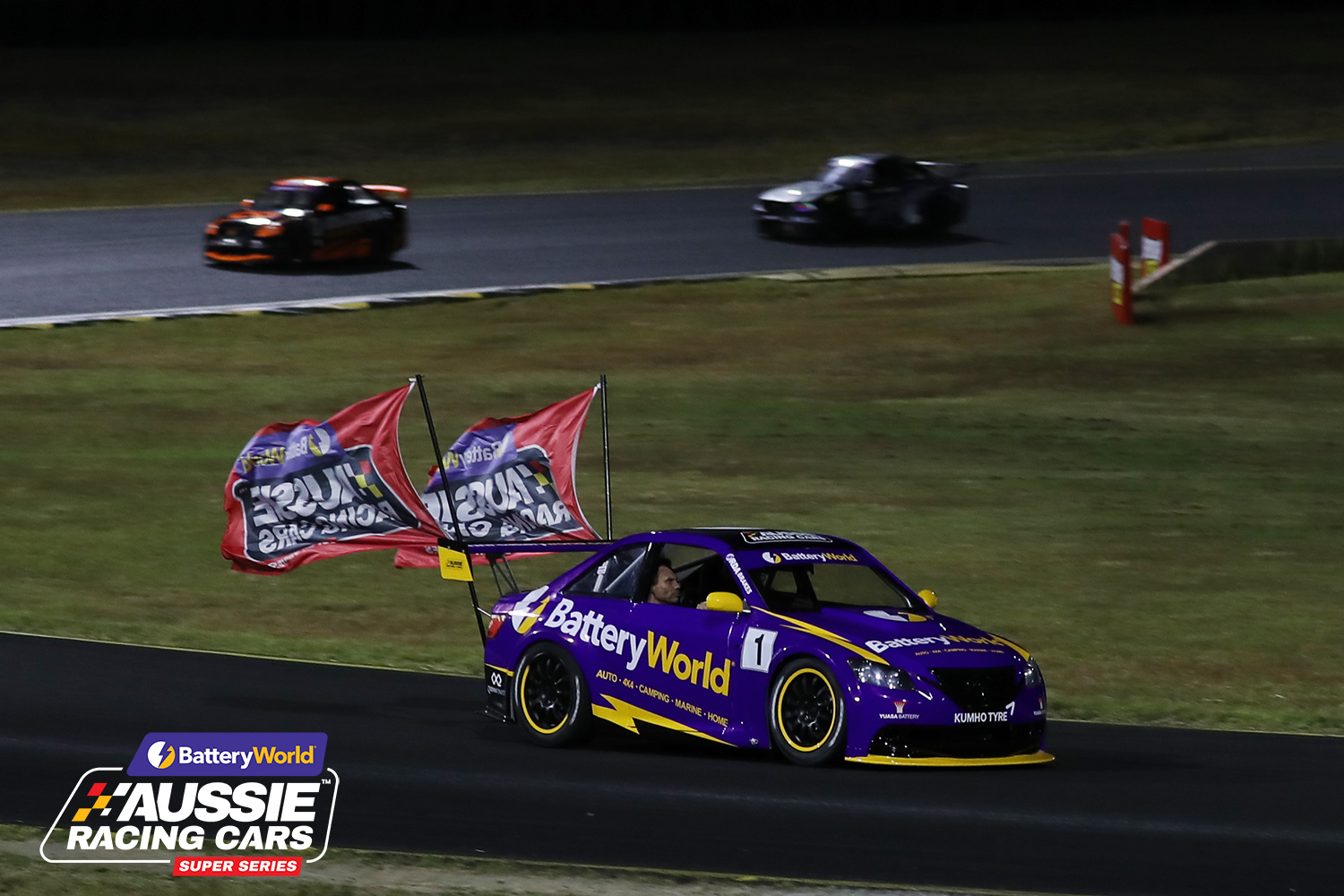 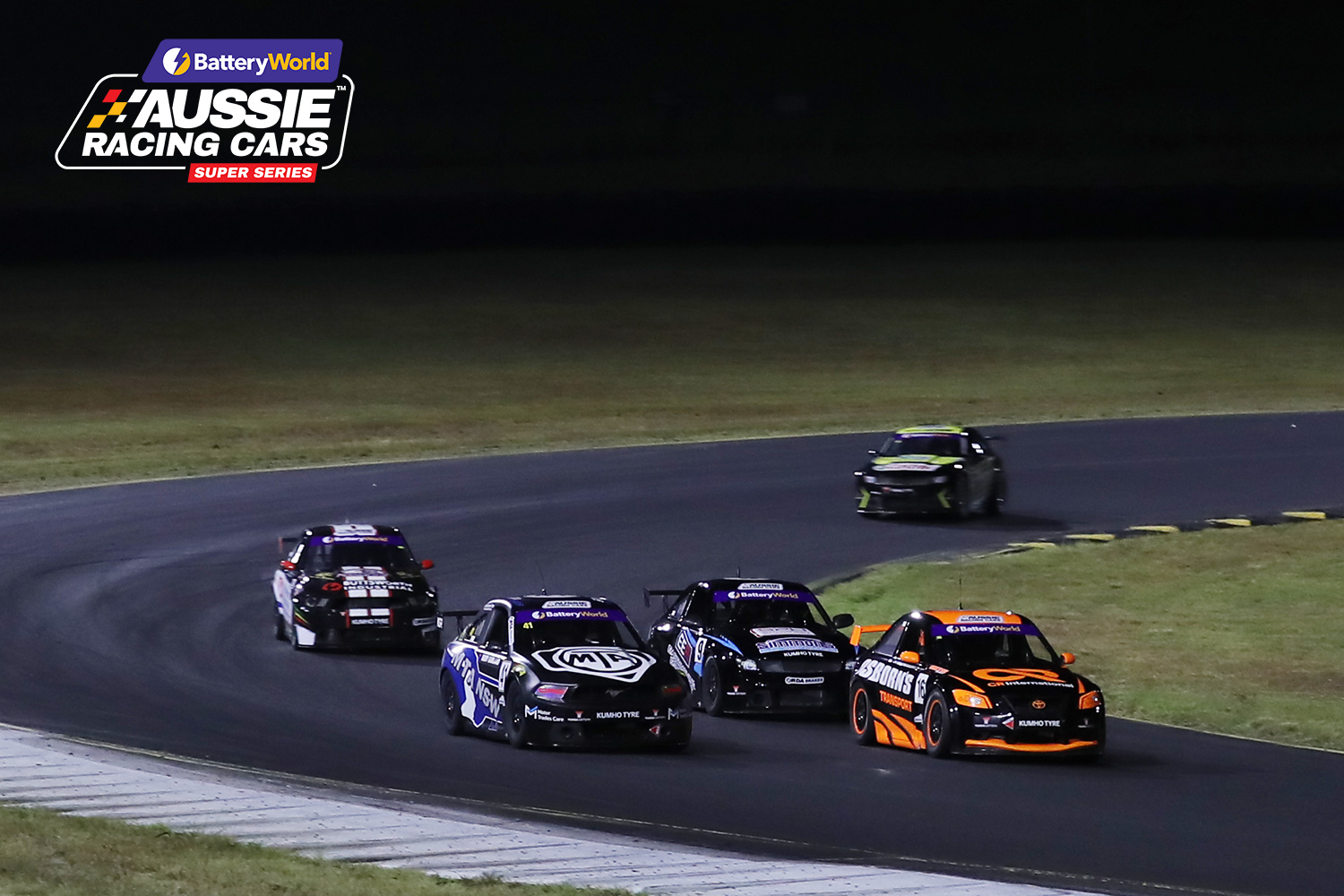 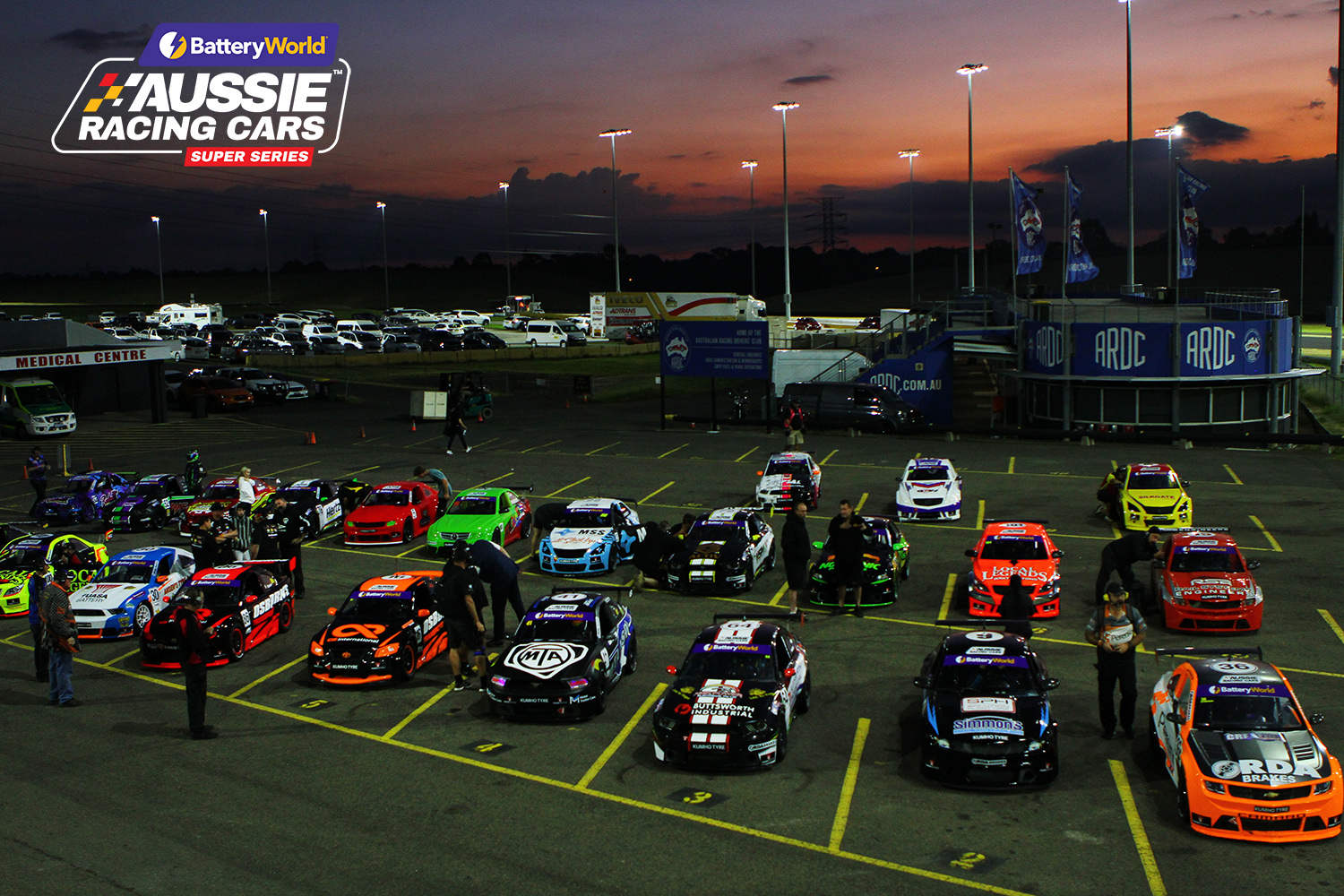 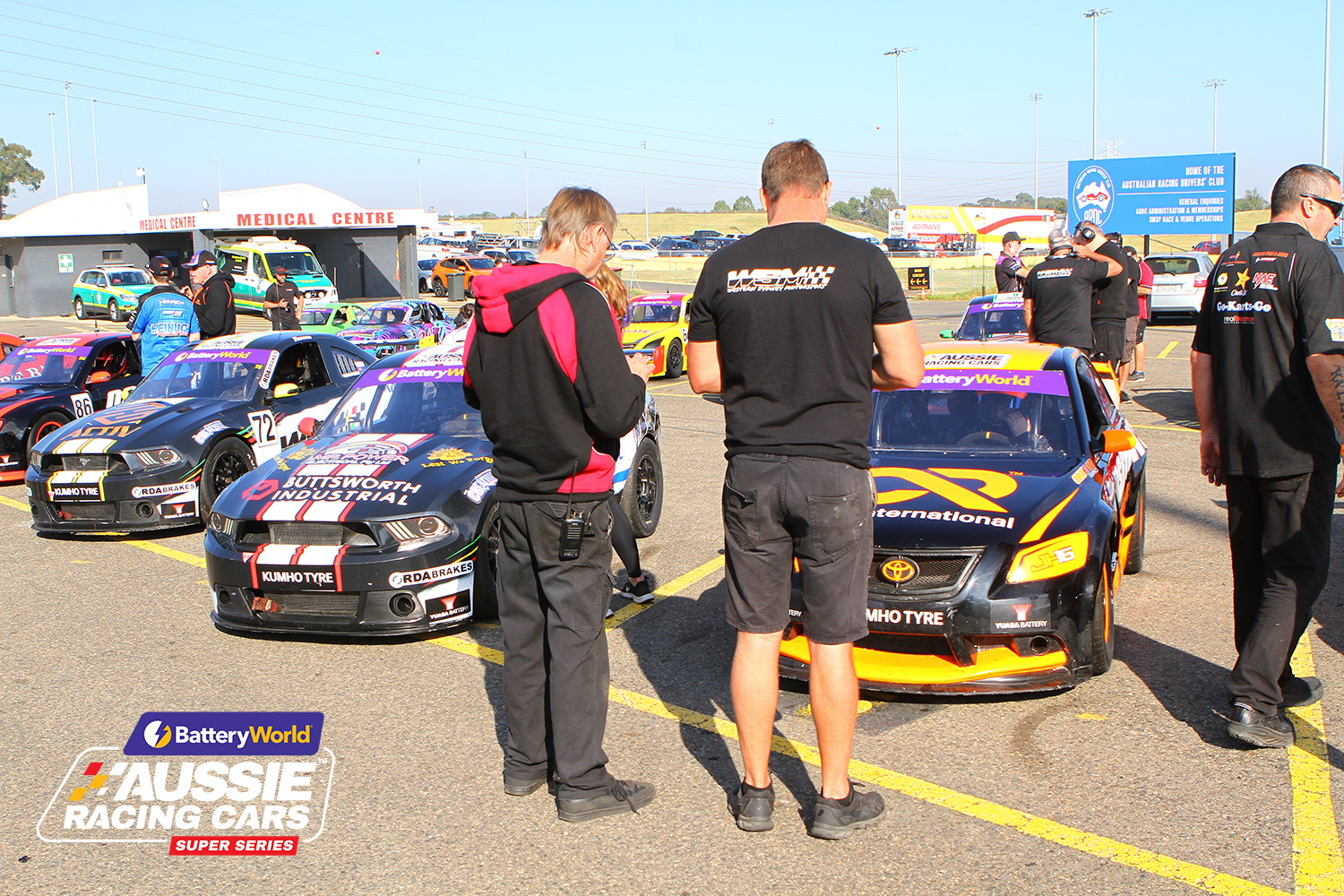 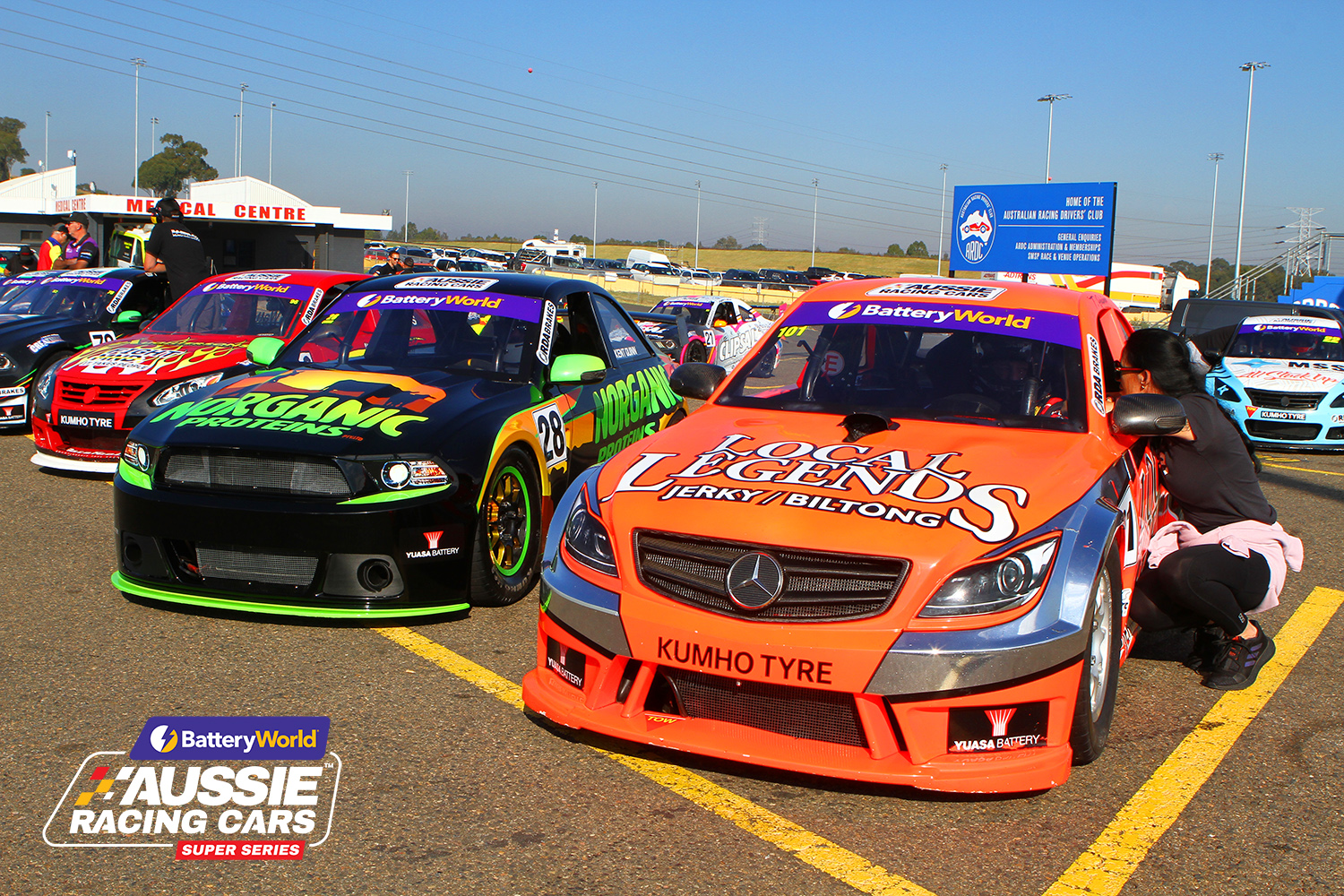 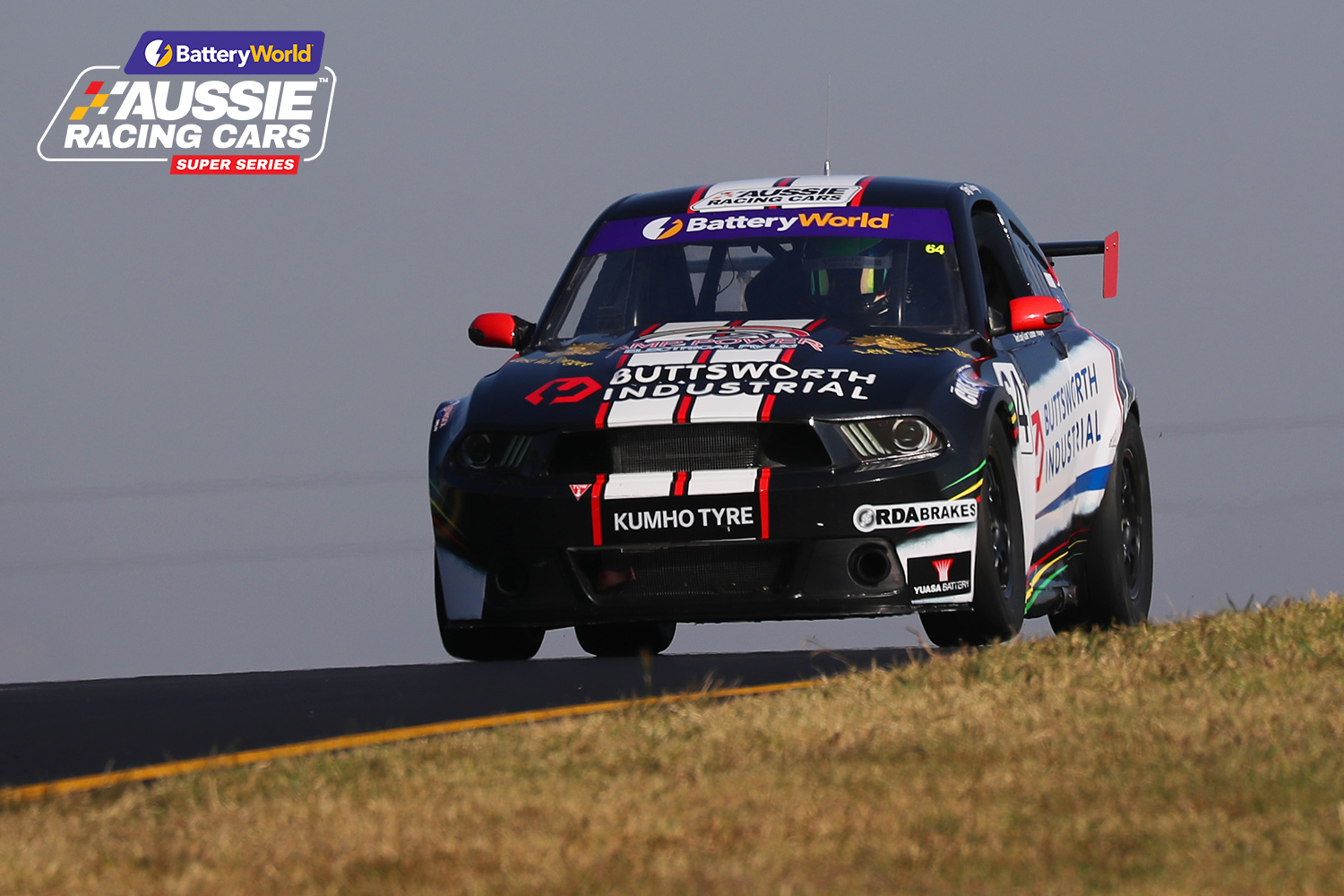 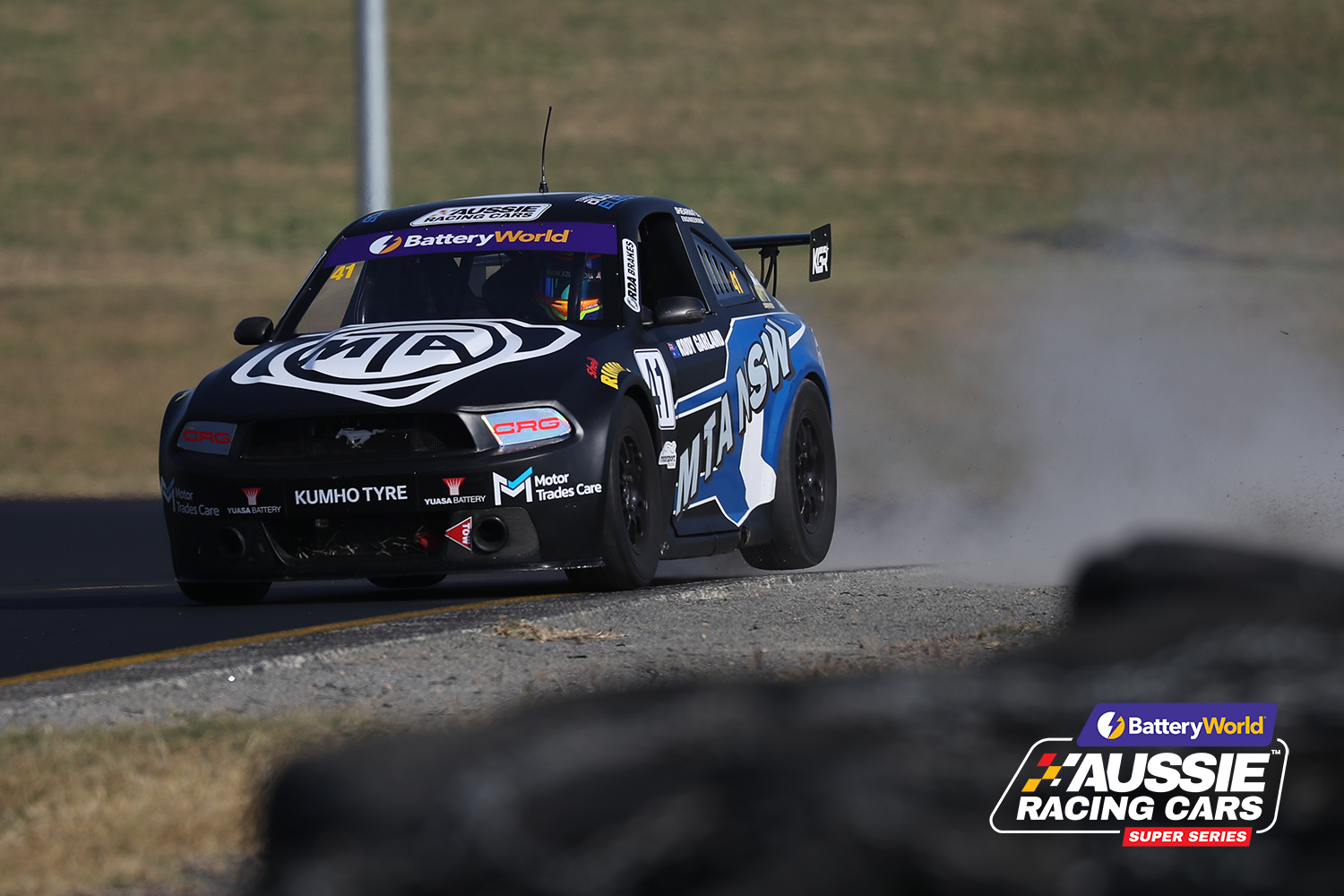 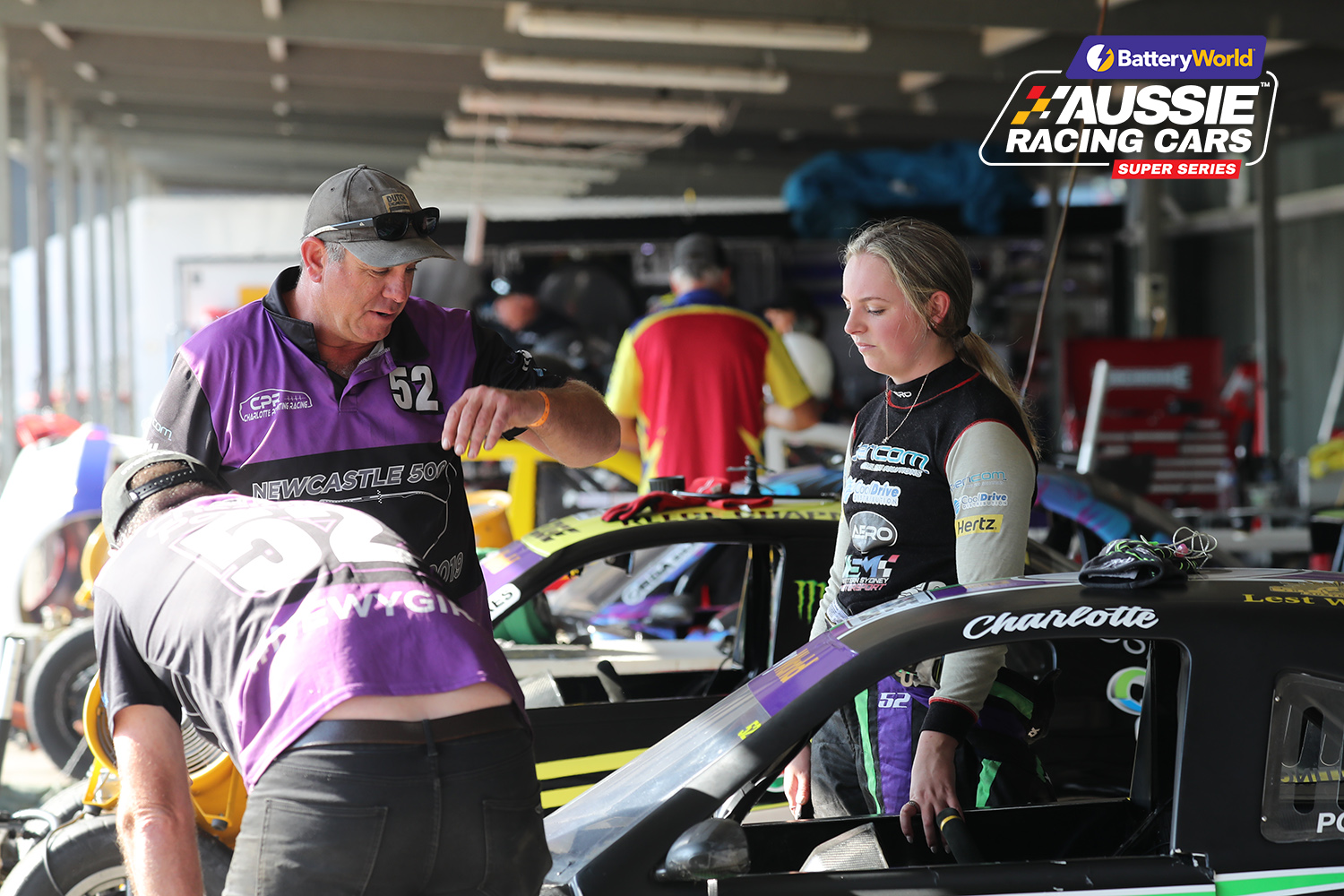 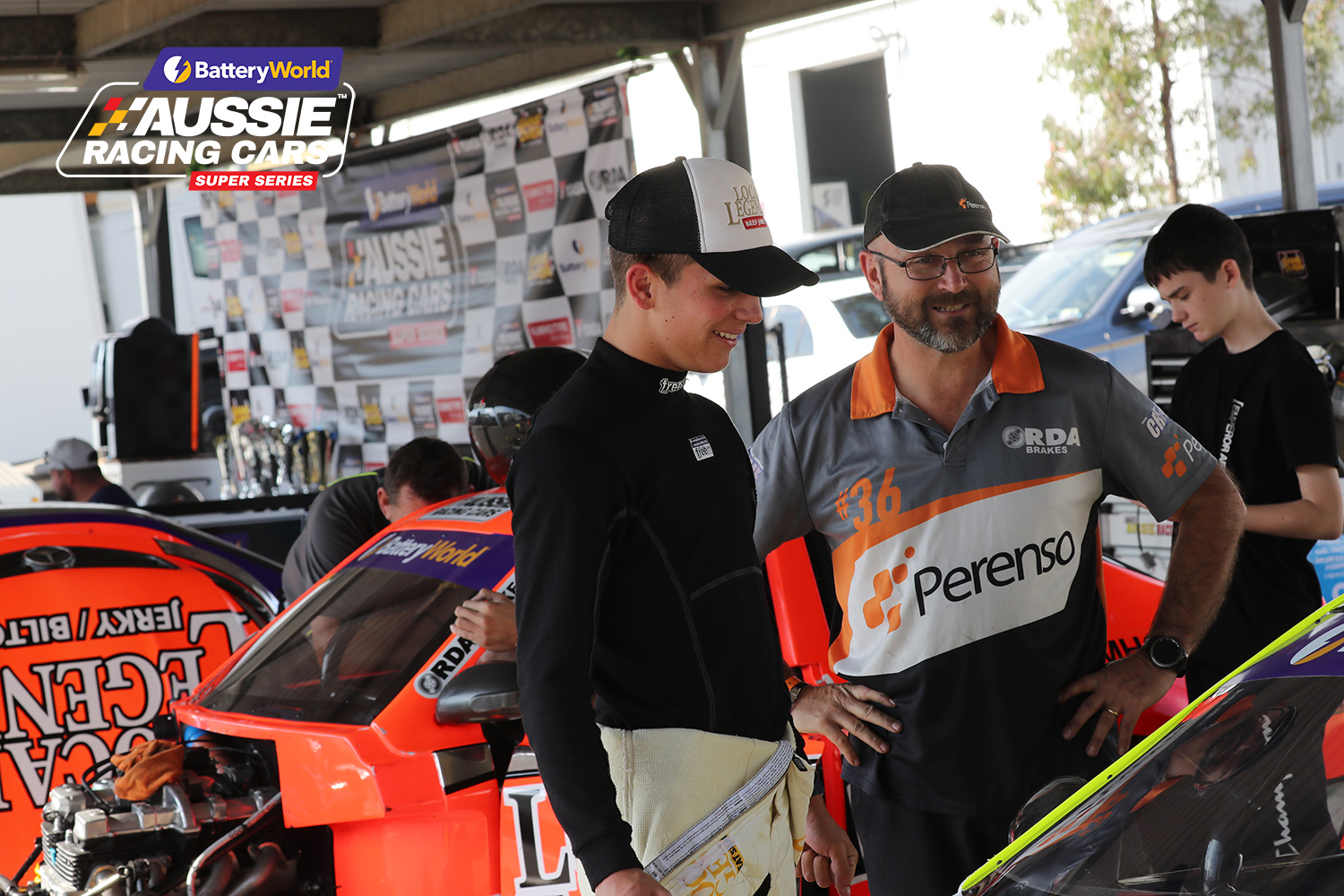 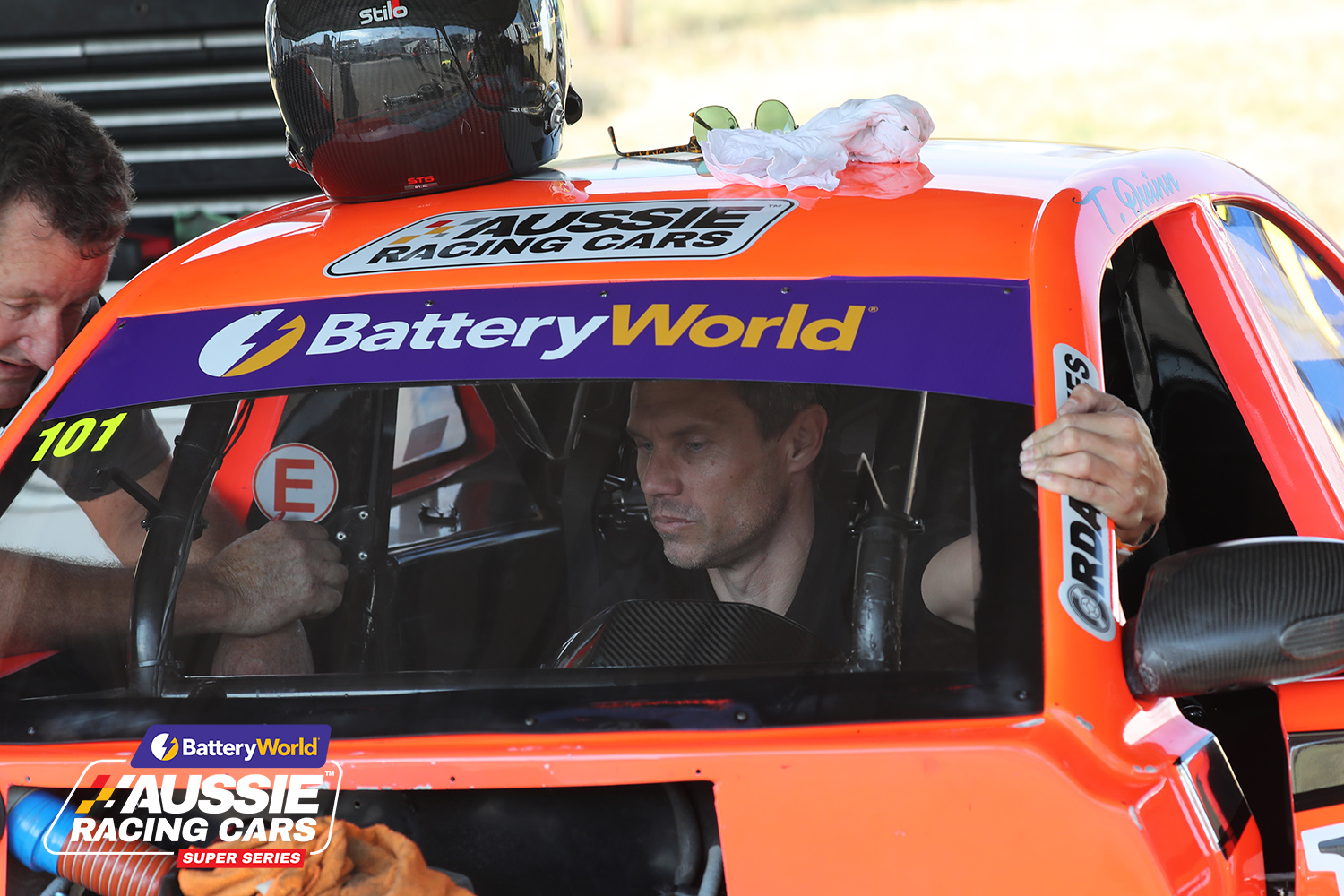 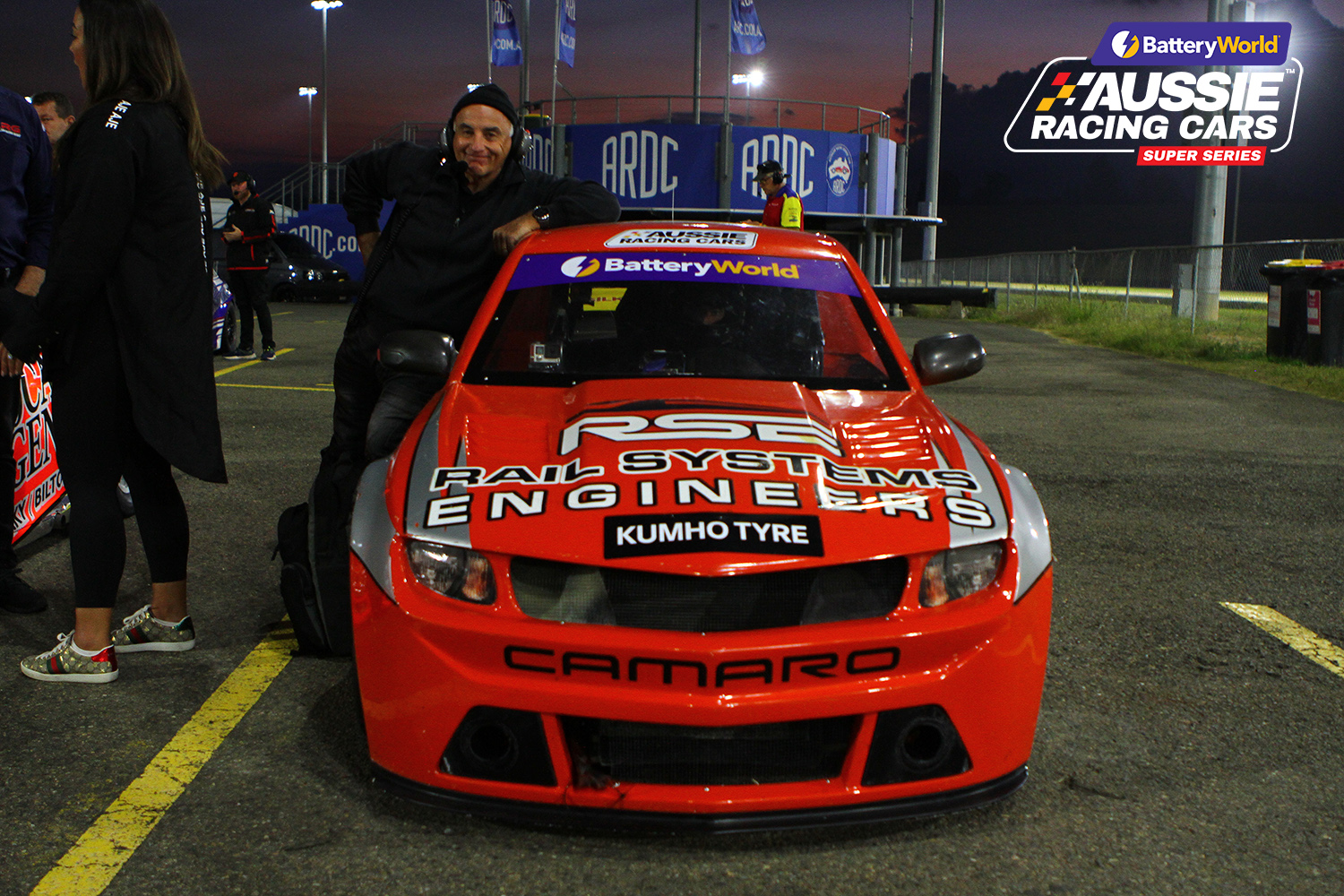 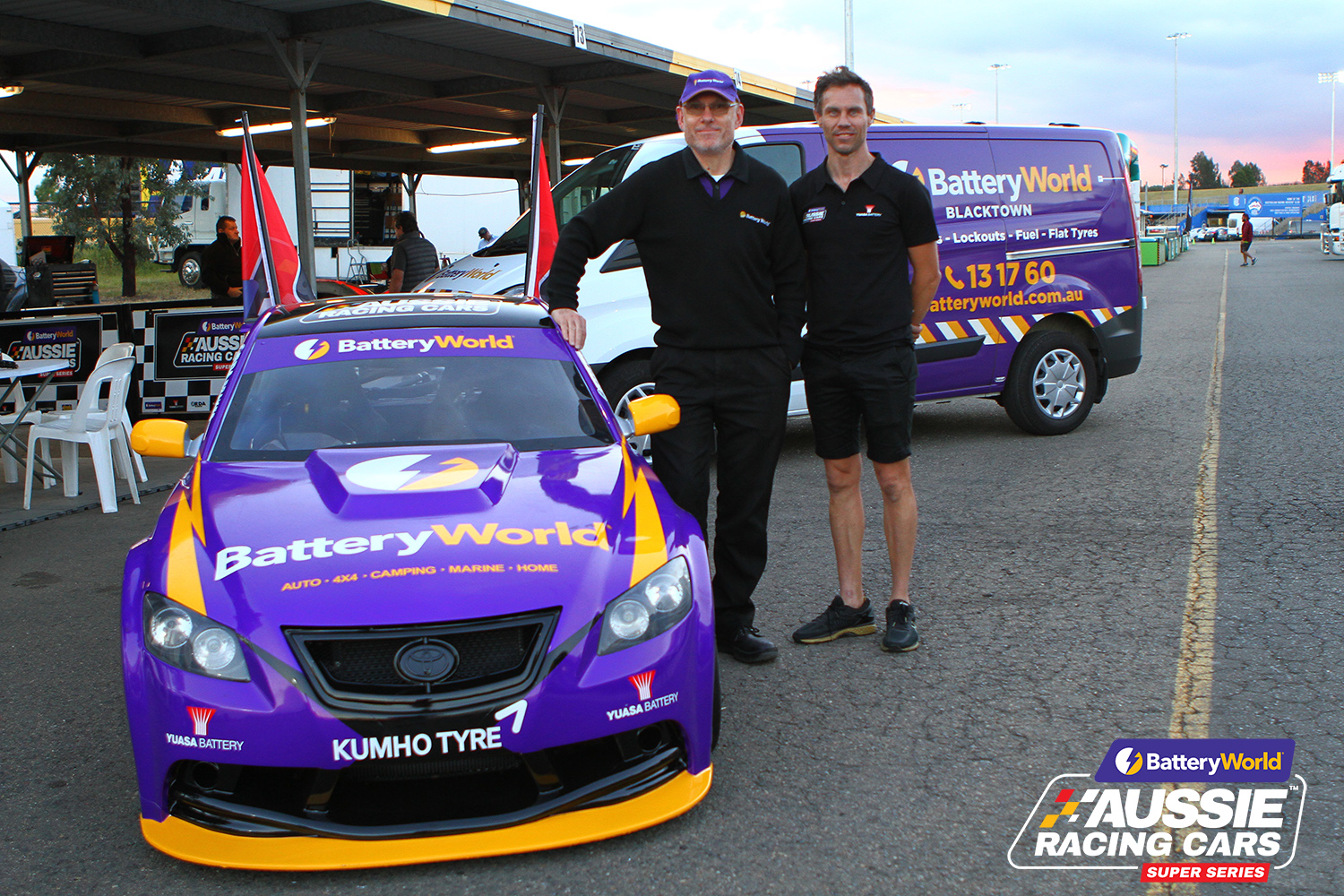 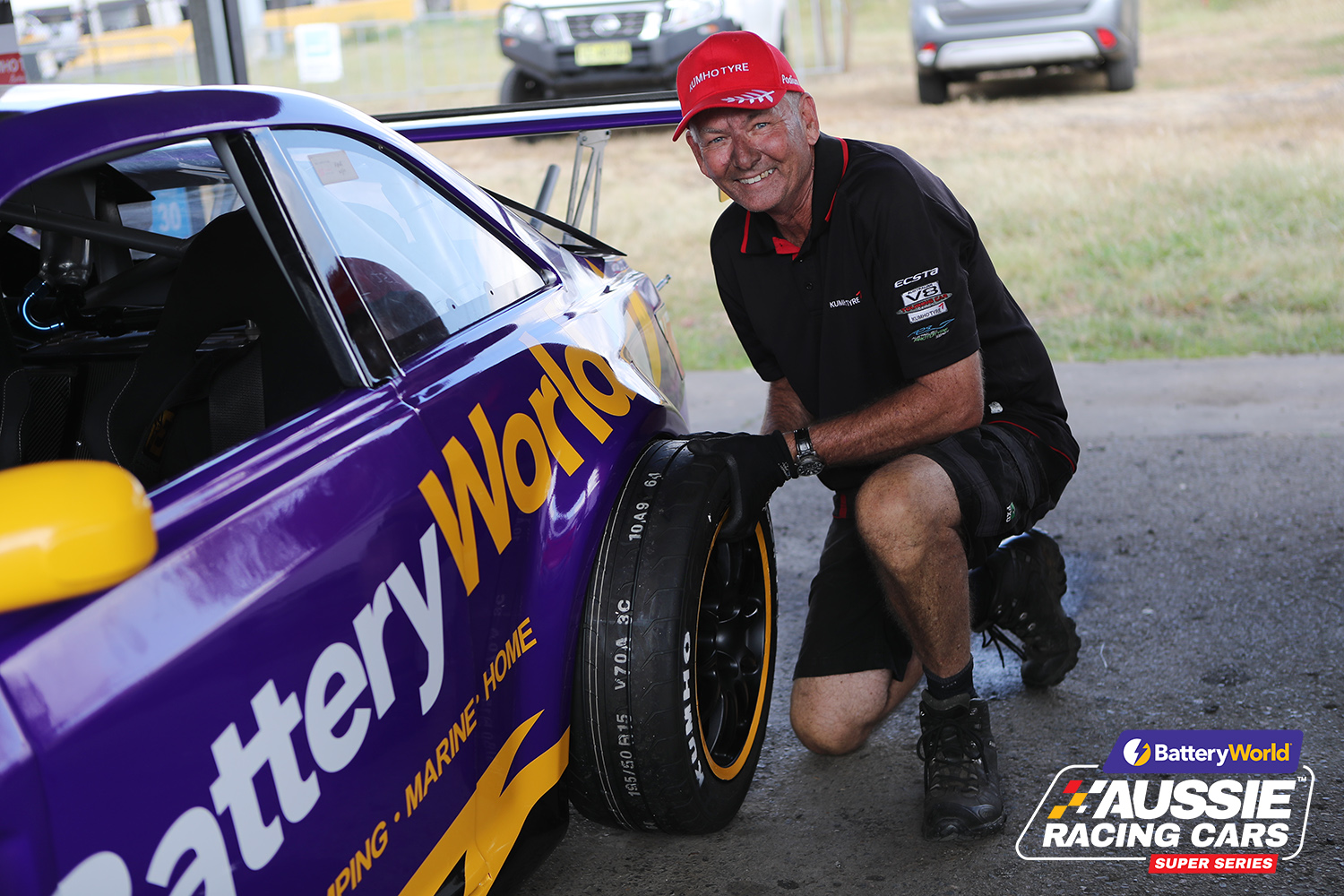 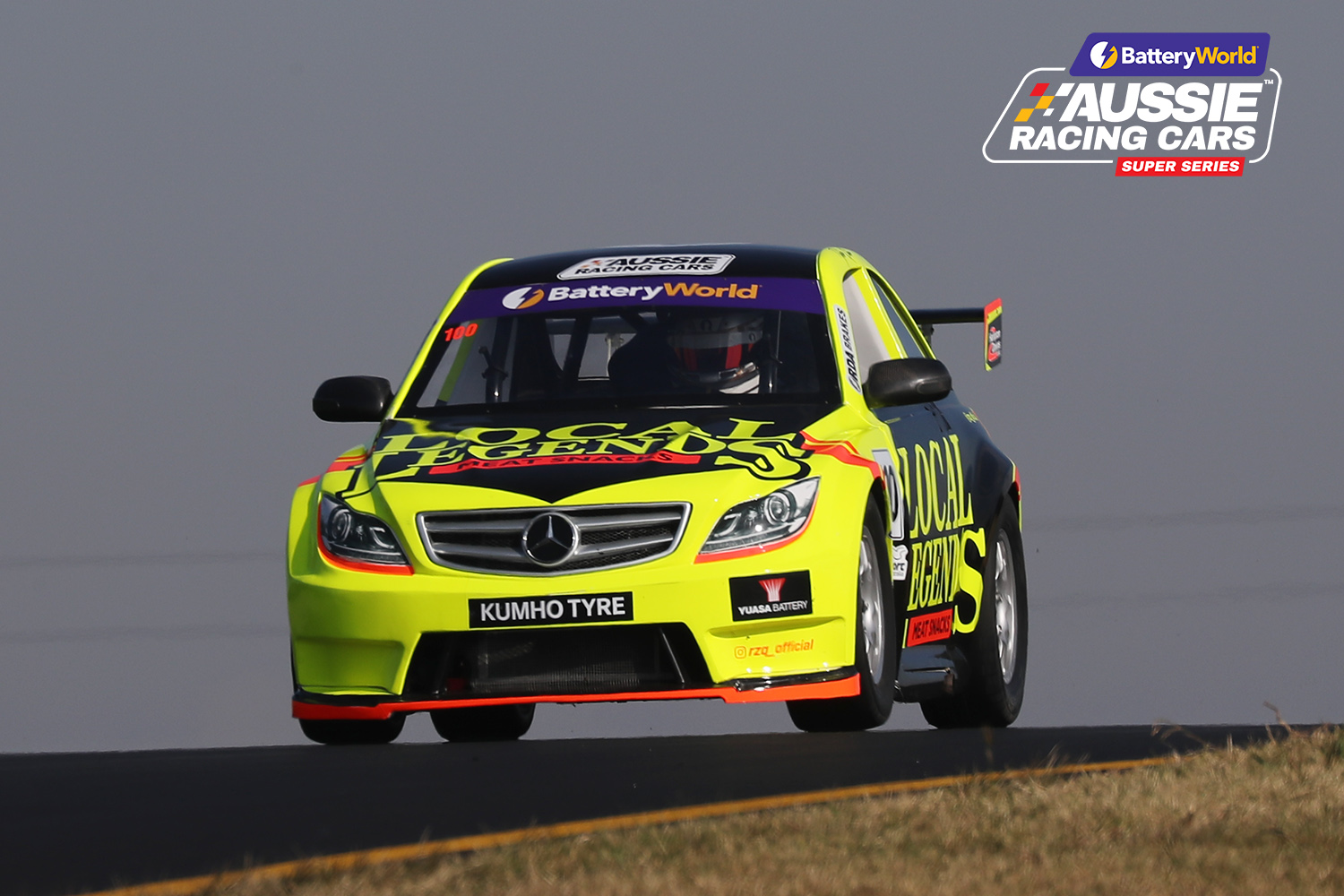 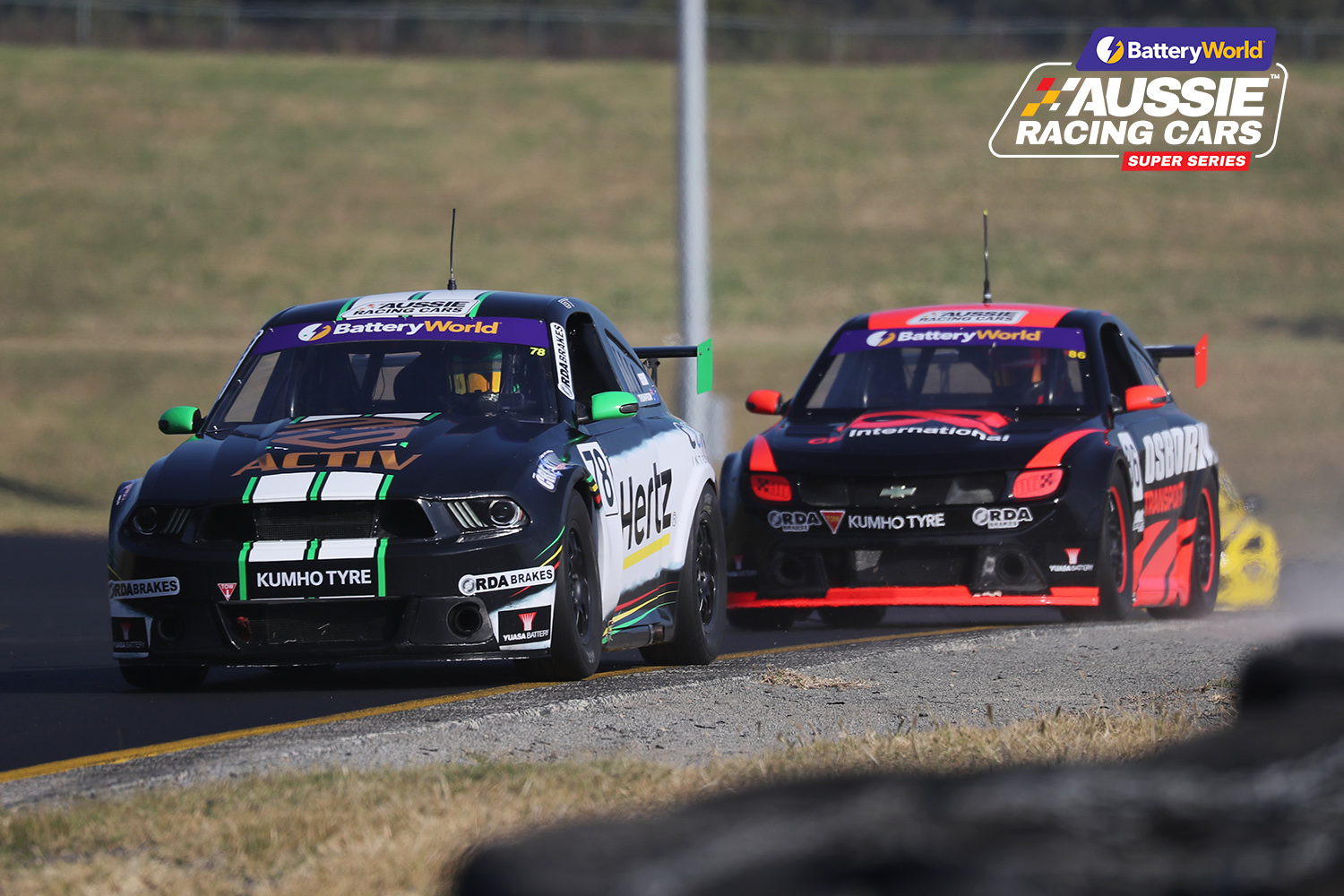 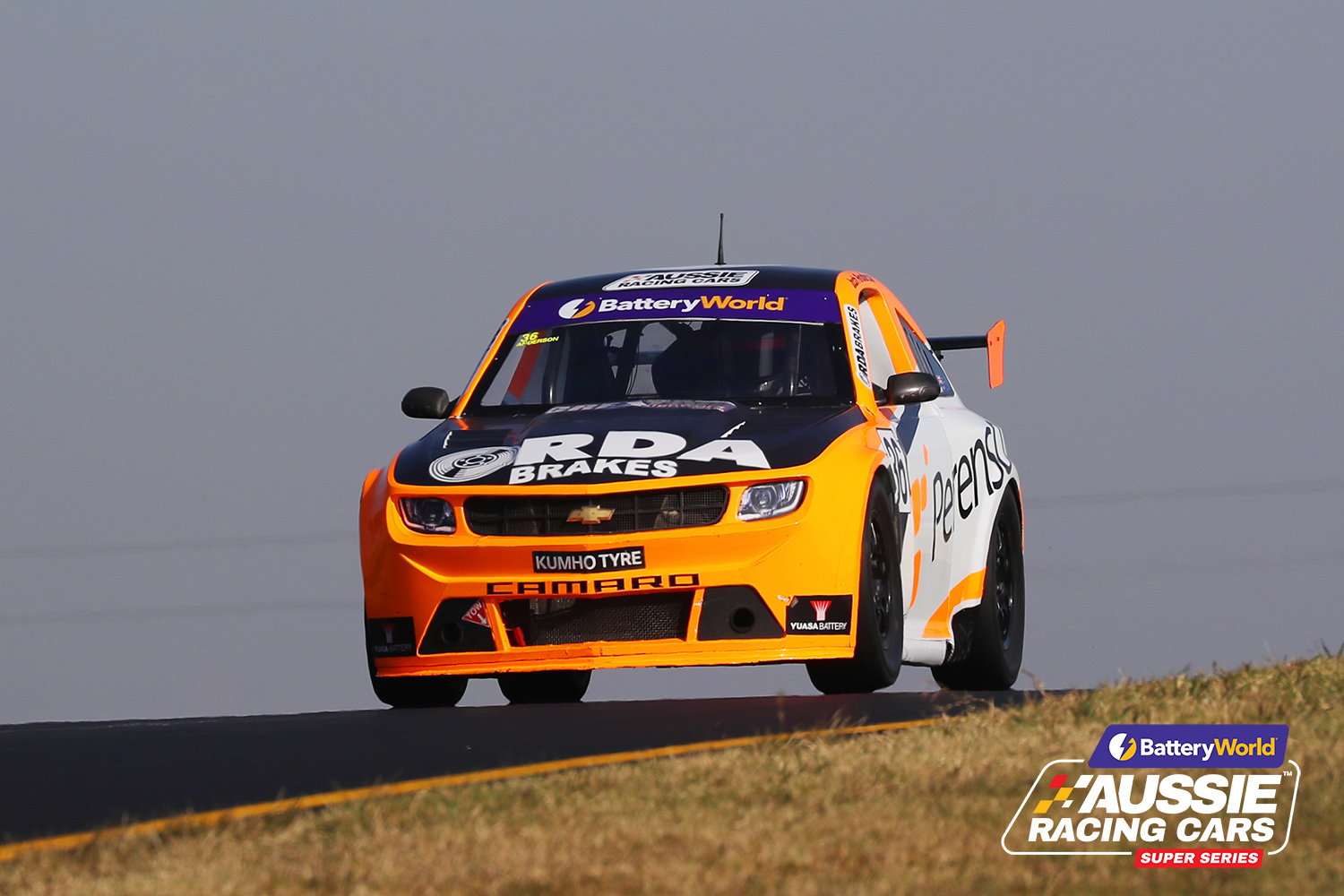