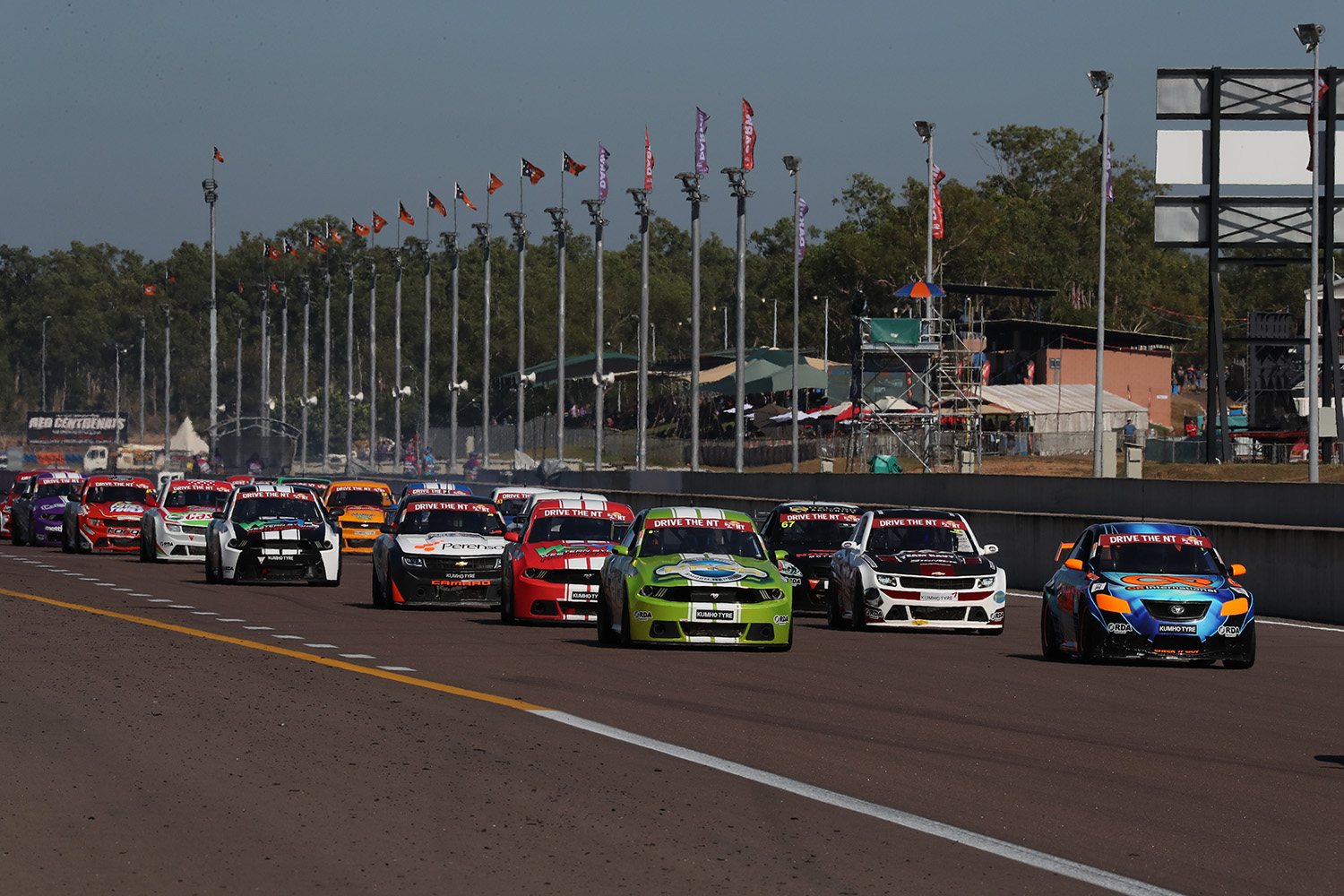 Here Are The Darwin Round 3 Race Reports

Round three of the 2019 Aussie Racing Cars, the Drive the NT Aussie Race Car Challenge has seen the series leader Justin Ruggier extend his lead even more winning all three rounds so far.

Out of the box Ruggier was going to be tough to beat, he was fastest in Friday’s practice, then took pole with 3 wins out of 4 races, and second in the last.

There was a bevy of other drivers trying to knock him off his perch, Paul Morris, Kel Treseder, Joel Heinrich, Blake Sciberras, Daniel Price all took turns at the lead over the course of the weekend.  The only other driver to win was Treseder who won the final race of the weekend, leading from lights out to flag fall.  In race three he was given a 5 second penalty but contested it and it was found he was not in the wrong (bumping another car off) and his second place in the race was reinstated.

Western Sydney Motorsport had both highs and lows over the weekend, the high of course was Ruggier’s win, the low was Grant Thompsons frightening roll-over at turn two after being clipped by another car, which saw his car roll in the middle of the track then bounce off the guard rails, Thompson was able to exit the car himself, he was taken to the Darwin Royal Hospital for observation, where it was found he’d broken 2 ribs, he was released that night and returned to the circuit Sunday, battered and bruised but in good spirits.

Without a doubt the Aussie Racing Cars put on the best “racing” over the event, Hidden Valley Raceway is very much suited to the Aussie Cars being a tight circuit, but also encompassing the long 1km+ front straight.  Its an event that all the teams love, the party atmosphere in the far north is fantastic, and a break from the cold winter down south is always welcomed.

Gold Cup went to Paul Morris, but he handed it to Jonathan Bloxom who was second in the class.
Leigh Bowler won the Master Cup
Craig Dontas took the Rookie Award.

The next round of the Aussie Racing Cars takes place at Queensland Raceway in July.

Putting down a quick lap early was the theory most followed in qualifying for the third round of the Aussie Racing Cars Championship Series at Hidden Valley today.

In hot conditions the tyres were at their optimum at the outset and only for a couple of laps at that. It worked that way for Justin Ruggier in his Mustang-bodied racer, posting a best of 1 minute 17.5590 seconds.

For much of the session Kel Treseder (Camaro) held second ahead of Joel Heinrich Racing (Altima). But the latter pitted for a period in the middle of the session, let the tyres cool as much as possible before one last attempt which saw him go to second spot by 0.05 seconds.

Next was Ruggier’s Western Sydney Motorsport team-mate Blake Sciberraswho was counting on a tow from another car to improve his time but couldn’t get one. Paul “The Dude” Morris (Altima) was fifth best, adding that the tyres went off after just a couple of laps – and that was worth around half a second.

After sixth placed Josh Anderson Racing (Camaro) came Craig Woods #64who only did a very small portion of the session due to failed coil pack in his Mustang. Meanwhile Leigh Bowler (Camaro), Tony Quinn (Mustang) and Reece Chapman (Camaro) rounded out the top ten.

Charlotte Poynting Racing parked early, her Mustang not feeling right after going into a tyre wall in practice. Brad Woods (Camaro) pulled off the circuit near the end of the allocated session time and when Ian Chivas (Altima) went straight on at turn five with a broken tailshaft, the red flags came out.

Both of Saturday races at round three of the Aussie Racing Cars Championship Series have been won by Justin Ruggier but he had to fight all the way to ward off feisty opposition.

In the first it was Joel Heinrich (Cruze) who led early, before Ruggier (Mustang) found a way past, with the pair just 0.16s apart by the chequered flag. “I normally make bad starts but that was a good one,” Heinrich said. “If the race had not been shortened due to the safety car, I felt confident that I would have passed Ruggier.”

Third spot went to Kel Treseder (Camaro) ahead of Blake Sciberras(Mustang) and Paul Morris (Altima) with Josh Anderson Racing (Camaro) and Craig Woods immediately behind them.

A safety car was called early when Grant Thompson crashed. The accident occurred on lap two at turn three where slight contact between he and Jonathan Bloxsom (Camaro), caused Thompson’s Mustang to rollover and career into the armco barrier. He was taken to hospital with suspected broken ribs.

Contrary to the poor getaway in race one, Ruggier led from the outset, firstly fending off Heinrich and then Treseder to win by 0.24s. “I really worked on getting the start right because of the restrictor change for winning race one,” said Ruggier.

Heinrich held onto third ahead of Morris and Anderson with a healthy gap to Leigh Bowler (Camaro), Woods, Reece Chapman (Camaro) and Sciberras who lost early momentum with an oil leak. Next came Daniel Price (Camaro) in good charge up the order after and Tony Quinn (Mustang) finished race one off the track at turn ten.

Taking his race wins for the season to nine, JUSTIN RUGGIER extended his race wins to nine at the third round of the Aussie Racing Car Championship Series at Hidden Valley where he also won race three and the round overall.

Despite starting out of tenth for race three, Ruggier (Mustang) drove brilliantly to win the race. In the top ten reverse grid race, and before he hit the front, there was a massive scrap where five race leaders and numerous positional changes among the top 11 cars.

The initial race leader was Dan Price (Camaro), before Paul Morris (Altima) had a couple of turns. Blake Sciberras (Mustang) also led and then finally Ruggier. At the end it was Kel Treseder (Camaro) who was a close second ahead of Morris, Joel Heinrich (Cruze), Reece Chapman (Camaro), Sciberras, Leigh Bowler (Camaro), Price, Craig Dontas and Josh Anderson (Camaro) tenth.

Accumulated points determined the final race grid where Treseder led from the outset and withstood the race-long pressure from Ruggier for the win. There was a multi car tangle at turn six on the opening lap which brought out a brief safety car and left some with damage.

On the resumption, Morris and Heinrich touched at turn one that caused Sciberras to go off and lose several places. Not long after Morris and Price were in the wars with the latter crashing. Later it was Morris on the receiving end with a spin following contact with Adam Clark (Camaro).

In the end Josh Anderson (Camaro) hung on ahead of Heinrich and Woods to claim third while the next best were Sciberras, Bowler and Chapman. Post-race penalties would see Woods drop to seventh and Bowler to ninth.